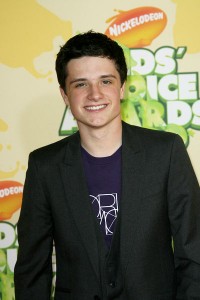 Back in February the internet was alight with rumors that Percy Jackson star, Logan Lerman, was set to play Peter Parker in Sony’s reboot of the Spider-man franchise. (Read the article here.)  The rumors were proved to be false, and instead it turned out that the studio had just had a few talks with him and other actors. Since then many names have been brought up including, Aaron Johnson who recently starred as the title character in Kick-Ass and Jamie Bell, a British actor who shot to fame a decade ago with Billy Elliot.  Although, the one name that keeps being brought up is 17-year old actor, Josh Hutcherson.

Hutcherson has quite a big career for an actor just shy of his 18th birthday. His upcoming appearance in the indie film, The Kids Are All Right (watch it here), is already causing a fair amount of buzz. Hutcherson was also one of the leads in last year’s Cirque Du Freak: Vampire’s Assistant. Although, audiences might get to know him a little better when the remake of the popular 80s film Red Dawn comes out later this year.

The actor has been confirmed by the studio to have screen tested, and there have been a number of meetings between the young actor and people involved with the franchise, like director Marc Webb.

“I really don’t know what’s going on with everything right now,” Hutcherson told movie website ComingSoon.net. “It would be an honor to play that role, it’s a big thing, it’s a total game changer. I really want to play a comic book hero. I’m not really huge into comics, but I’ve always been big into superheroes from the cartoons and the movies that have been made about them.”

Hutcherson will be shooting the sequel to Journey to the Center of the Earth this fall, but is free to start shooting after that film wraps, which puts him right on schedule with Sony Pictures shooting schedule for the Spider-man reboot.

I have to say that I wasn’t that impressed with his performance in Cirque Du Freak, but if the buzz is correct the kid does have decent acting chops. The best thing about the role is that he fits into the young mold for Peter Parker. Hutcherson could easily slip into the role of a high school kid much better than Tobey Maguire did with the original series.

What do you think? Is Hutcherson right for the role? Let us know in the comments!