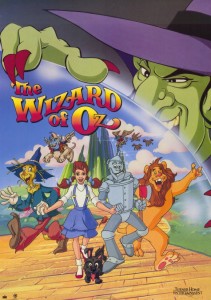 In this short-lived Saturday morning cartoon, Dorothy decides to return to Oz using her ruby slippers…which I guess makes, um…sense. Sure. Why not?

The Wicked Witch has been resurrected by her flying monkeys which is complete nonsense but does explain why she surrounded herself with flying monkeys in the first place. I mean, I can’t even imagine what a couple of un-caged birds would do to a house…but castle full of flying monkeys? Yikes! And making matters worse, she was allergic to water so it’s not like she could even mop up the joint.

Anyway, the recently revivified Wicked Witch has used an “evil wind” to hijack the Wizard’s hot-air balloon and Dorothy has to get the band back together and defeat the witch once and for all. Which would presumably entail the wholesale slaughter and inevitable genocide of flying monkeys in order to prevent them from immediate resurrecting her.

Enjoy your Cap’n Crunch while watching that one, kids.