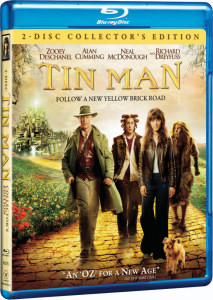 All you really need to know is that it stars Zooey Deschannel and she wears the blue-and-white checkered farm-girl dress.

But if you must know more…this was the Sci-Fi Channel’s take on the story. (And yes, that’s how you spell it since this was made before they became SyFy. Don’t get me started.) But, seeing as how it’s Sci-Fi, they had to steampunk up the place. So they call the place “The O.Z.” and the Scarecrow has become Glitch, the Tin Man is a former cop (like a tin star…get it) who was locked up in iron suit as punishment (in case you didn’t get the “tin star” part) and the Cowardly Lion is now Raw who…um, you know…looks like a lion. (They got a little lazy on that one. They must have really shot their creative wad on the whole “Tin Man-twofer”.)

And Dorothy, who is now D.G., must find their Wizard-equivalent Ahamo, which is “Omaha” backwards. However, poor Zooey can’t properly pronounce Omaha backwards so it results in unintentionally hilarious lines like “Who’s ‘a homo’?” and “You’re the only one who knows what ‘a homo’ looks like.”

Just in case you don’t believe me.