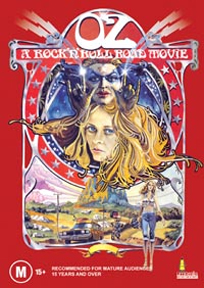 In this Australian re-imagining of the tale, Dorothy is a 16-year old groupie. I know, know…16? Yuck. But it’s Australia so maybe it’s not creepy down there. Plus, it was 1976. You can be appalled all you want but be sure and delete “My Sharona” from iPod first, k?

The Scarecrow, Tin Man and Cowardly Lion have been replaced by Blondie, Greaseball and Killer (respectively) but instead of Glinda the Good Witch we get Glin The Good Fairy. And seeing as how this was made in 1976, that’s going exactly where you think it’s going.