Note: this is not intended to be a comprehensive technical guide regarding DRM, nor is it a review of Sim City. 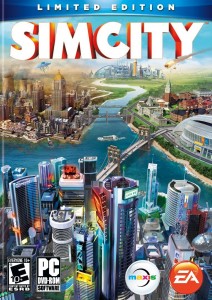 I didn’t have a home computer in elementary school; they were just too expensive, and my parents feared I’d spend all my time on it. So while my friends were at home surfing the net on AOL or playing DOOM, I was missing out.

I wasn’t stuck completely without access to computer games, though. My elementary school, a private Catholic school in North County, had a computer lab with a few “educational” games, such as the uber-classic Oregon Trail and Where in the World is Carmen San Diego?

Without a doubt, though, my favorite game to play, was the original Sim City. Whenever I got a chance, I build up Steveland into a sprawling metropolis, only for a damn earthquake to knock out the power grid and send my Sims into panic. Despite this frustration, it was still an entertaining game, and it certainly beat Mario Teaches Typing.

Decades later, EA has become a gaming giant. When they announced a new version of Sim City, my heart skipped a beat or two, and not just because of the triple Whopper with cheese I was eating. I was excited to relive a big part of my childhood, and I know I wasn’t alone; my best friend from high school, Danny, was equally excited to play it.

My initial plan was to order the game and download it this weekend, as the game was released on Thursday. By now, you may have heard the reason I likely won’t be doing that.

As is being reported on tech sites all over the world, the launch on Thursday has become one of the biggest disasters in recent gaming history. Amazon pulled the game from their offerings for a while, and it’s on pace to become one of the lowest-rated products on their site (1,328 1-star reviews as I write this).