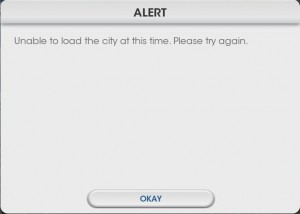 At the heart of the problem is a little topic called digital rights management, or DRM. DRM is, in gaming terms, a publisher’s attempt to prevent piracy by restricting installations/access in a variety of ways. Games typically require online registration, with some companies restricting the amount of times a game can be installed, others requiring an internet connection to validate the installation each time you play. DRM has caused issues in the past, but many gamers still play games that utilize DRM. I use Steam to play several different games: the Fallout series, Deus Ex: Human Revolution, Modern Warfare 2, and several others.

When EA was promoting Sim City, though, the whole ballgame changed. Rather than requiring the game to simply validate the activation before the gamer plays, EA is requiring a constant online presence for the game, even if the person is playing single-player.

Now, you would figure given the popularity of the franchise and the anticipation, EA would probably have a buttload of servers ready, even have a crapton of servers in reserve, right?

Most of the reviews online don’t even address the game, simply because they can’t play the game. When attempting to log on, gamers are reporting incredible delays while being forced into queues. When their time in the queue is up, many people still cannot connect.

The lucky few that are able to access the game are reporting a fun, if buggy, experience. Then comes the kicker, as even these players are reporting that their connections are timing out, leaving them unable to save their progress, forcing them to start over.

The result is a maelstrom of negative, scathing feedback from gamers who have shelled out upwards of $60 for the opportunity to play and have been denied the opportunity. Gamers around the globe are demanding EA remove the online requirement and allow people to play the game when offline. Valve has implemented this with their Steam program, which allows gamers to play a game in offline mode and then sync their progress up the next time they’re online.

The issues with connectivity will eventually get fixed, and the uproar will eventually settle down, but it still begs the question of whether or not this is actually necessary. In the past, games which have required persistent online presences have still been cracked, negating the need for DRM.