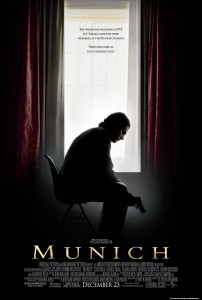 Steven Spielberg continued his successful run of historical period pieces with this spy/thriller of sorts following the Israeli reaction to 1972 Munich Olympic hostage massacre that not only captures the tension of assassination, but perfectly conveys the right vs. wrong of the Israel/Palestine conflict.

The film opens amid a flashback that we will re-visit throughout the film of the Palestinian terrorists group Black September infiltrating the Olympic housing and taking the Israeli athletes hostage. After following the press/public perspective of the event unfolding, leading up to the haunting line “There all gone,” on NBC’s broadcast. We next jump to a top secret meeting of Mossad in which lead by the Prime Minister of Isreal they compile a list of targets as part of retaliation and retribution of the terrorist attack. To lead this mission they recruit Avner, the son of a war hero and a former body guard of the Prime Minister. With the aid of four other specialized individuals, bombs, documents, clean up, and cars, he will eliminate the desired targets as all ties are cut from his connection to the government. Operating on cash out of a safety deposit box and names on a list Avner is at his own means to locate their targets and eliminate them.

The film starts from here to turn into a hit man, spy thriller of sorts and the set pieces around the kills are elaborate and wonderfully executed. Spielberg throws in countless camera tricks and ramps up tension with ease, keeping the viewer on the edge of their seat as we watch the assassination attempts unfold. Though, they have their ups and downs as bombs don’t quite work as planned, they try to avoid civilian casualties, and they slowly realize that they might be being hunted as well. As the film goes on the film focuses more and more on Avner as he grapples with being away from his family and paranoia slowly boils over in his mind as the group gets deeper and deeper and Eric Bana just nails it. We get completely lost in his character and feel for him every step of the way. As his new born arrives, as he tries and protects his family, as loses his trust in everyone around him, it is one of Bana’s finest performances to date.

Bana is surrounded by a talented wealth of actors as well starting with Daniel Craig as Steve, a smart ass with a fire under his ass for killing Palestinians that not only brings a bit of edge to the proceedings but a bit of humor as well. In fact, Spielbergs ability to weave humor into such heavy proceedings never ceases to amaze me and he does it expertly well through out almost the entire length of the films run time. The other supporting players include the always great Ciarán Hinds as the fixer and rational mindset among the assassination team and Geoffrey Rush as their only connection to Mossad and they both really shine in their roles. Michael Lonsdale and Mathieu Amalric are both superb and unreadable as a family of French informants that assist Avner along his way and keep you guessing as to if they are helping them, hunting them, or both. Mathieu Kassovitz and Hans Zischler round out the team and give the group a bit of humanity with Kassovitz really shining in a few scenes as he begins to buckle under the pressure.

Spielberg’s camera never fails to impress in this film with some incredible single takes that take full advantage of everything in the frame. Mirror’s, crane shots, moving in and out of cars, the camera is a marvel and helps keep Eric Roth’s tightly knit and fast moving screenplay plow forward at a whips pace. The costume and set design is also stupendous as the film looks and feels shot in the 70’s, the grain and grit of era pops and helps further envelope you into Spielberg’s world and the era.

The film also does a fine job of discussing and analyzing the Israeli and Palestinian tensions from all angles. Who is right, who is wrong, is anyone doing anyone any good by killing one another. What is being gained by all of this and sadly these thought and questions still aren’t answered today making the film still extremely relevant as ever even thirty-five plus years later.

In the end, Munich is an excellent example of creating a diverse thriller that not only entertains and thrills, but makes you think and analyze history on more than a surface level. Spielberg produced a message film that was part action flick, spy thriller, and a decent into a characters self being and all elements work beautifully. All this coupled with a fantastic pace and amazing cinematography and you will be hard pressed to find a whole lot of historical period pieces that work as well as this one.