Enter to WIN passes to COUPLES RETREAT at the St. Louis Advance Screening

ReviewSTL invites you to enter for the chance to win a pass to the
St. Louis advance screening of COUPLES RETREAT 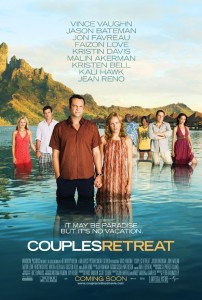 In order to enter the contest, simply leave a comment below with your worst vacation story. Winners will be chosen at random and notified via e-mail.

Screening is TUESDAY, OCTOBER 6 at Ronnies. Good luck! We hope to see you at the movie.

Vince Vaughn, Jason Bateman, Jon Favreau, Malin Akerman, Kristin Davis, Kristen Bell and Faizon Love star in Universal Pictures’ upcoming comedy Couples Retreat. Based on an original idea of Vaughn’s, the comedy follows four Midwestern couples who embark on a journey to a tropical island resort. While one of the couples is there to work on their marriage, the other three set out to jet ski, spa and enjoy some fun in the sun. They soon discover that participation in the resort’s couples therapy is not optional. Suddenly, their group-rate vacation comes at a price. What follows is a hilarious look at real world problems faced by all couples. The film also stars Kali Hawk and Jean Reno.

NO PURCHASE NECESSARY. While supplies last. Passes are available on a first-come, first-served basis. One pass (each admits two) per person. Theater is overbooked to ensure capacity. Employees of participating sponsors are ineligible.