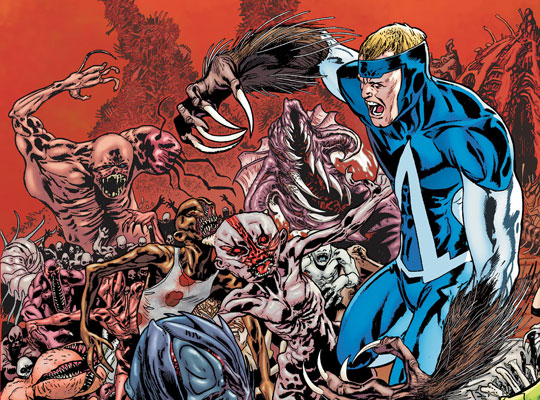 Grant Morrison took a second-tier (or even further down the DC line) character and created possibly one of the best runs in comic book history. Rather than focus on the powers of Animal  Man, Morrison turned him into a modern day everyman. The run was something completely original and showed the life of an average man who is a superhero. The most fascinating aspects of the book were not supervillains, but his relationship with his family. Add in the fact that the series had a penchant to break the fourth wall, and other unique twists, and you can see why it was so ahead of it’s time.

The series would make a great film as alternative viewing for people tired of over the top action spectacles. It could be a smaller budget look at superheroes and how we view them in pop culture. It could be unlike anything ever done in the superhero genre.  With a director who understands the material and has a great sense of humor, the material could easily reach cult status upon release similar to Kick-Ass or Scott Pilgrim vs The World.

Animal Man isn’t a character that is widely known by anyone, which makes unlikely that WB will want to push it into production. Recently, studios have taken on riskier comic projects like Kick-Ass, and the results haven’t been outstanding. The films clicked with the core audience, but didn’t find much of an audience outside of that. Films based off of smaller projects will require a much smaller budget.

Even if it isn’t a huge action spectacle, it will still have to use a number of special effects during the moments when he is a hero. Much of the film would have to rely on snappy storytelling and solid acting. With the proper cast, it could be an indie hit.

Wright has shown time and time again that he understands the geek mentality, and has married geek culture and pop culture into products easily digested by the masses. Unfortunately, Marvel has already realized this and signed the director onto their Ant-Man adaptation. If he’s able to take Ant-man to another level, there is no reason he couldn’t do the same with Animal Man. Most likely, he won’t want to jump to yet another comic book project right after though. It sure is nice to dream though, isn’t it?

Wilson is an actor that most people will recognize, but can’t name. With roles in films like Phantom of the Opera, Watchmen, The A-Team, and Young Adult, he’s proven he has the acting chops to take on a lead role. He has the physique to pull off a superhero, but a down-to-earth look that lends him credibility as the family man he needs to be in The Animal Man.  He’s a big enough actor to carry a smaller film, and if the film takes off, it could be that push that moves him onto another level.

Next Page: The Books of Magic