We are in a comic book renaissance of sorts. The comics themselves aren’t selling like they were even two decades ago, but they have a loyal following that keeps the industry chugging quietly along. The bread and butter of the industry is now selling the rights of comics for a big screen adaptation. Each new comic book film, starting with Tim Burton’s Batman, to Bryan Singer’s X-Men, all the way to Joss Whedon’s The Avengers, has led us to a point where comic book films rule the box office year in and year out.  Comic fans can rejoice, as comics and their adaptations are going no where.

Chances are that Hollywood is going to be pulling every story they can from comic books/graphic novels. Here are a few that we feel deserve a look at. 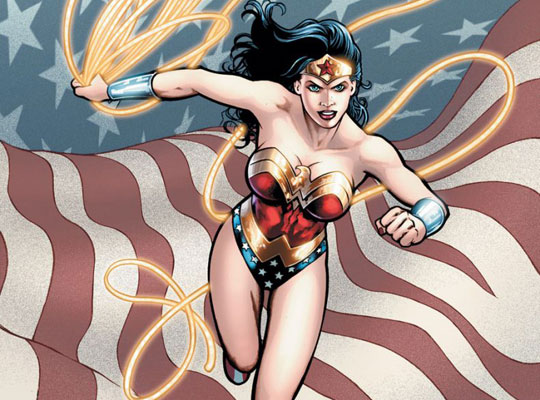 A Wonder Woman film is going to happen. Being one of DC’s biggest properties, and the most popular female superhero, DC would be insane not to at least give it a shot.  The character could possibly be the biggest superhero to currently not have a franchise. Plans for a film have been in place for over a decade, but the film has been stuck in development hell. At one point Joss Whedon was attached to write and direct the film, but left the film in 2007 after disputes with the studio over the script.  Currently, no one is officially tied to the project, but one would have to assume that will chance soon.

Warner Bros. and DC have every intention of making a Justice League film, a film in which Wonder Woman will be one of the three main characters, alongside Batman and Superman. However, the production of the Justice League film is having almost as many problems as the Wonder Woman film has over the past decade. One script has already been trashed, and a couple rumored directors (including Ben Affleck) have come and gone. With the success of The Avengers, DC doesn’t want to lose footing against their biggest rival, Marvel Comics. So, expect them to get the production into order soon after the release of Man of Steel this summer. Shortly after, expect announcements of tentpole films like Wonder Woman, new Batman movies, and possibly some second and third-tier DC characters.

Originally tied to Thor 2, the director of Monster severed ties with Marvel. However before that she was quoted as saying, “I have a long love of superhero films and so I’d been saying over and over again that I’d like to do one. The Marvel guys are so brave in terms of who they choose overall, and I don’t think they had any cause about me being a woman. That’s the real revolution.”

It would be great to have a female director take the reigns to a major superhero film, especially one centered around a female superhero.  Jenkins has the dramatic chops for such a film, having directed 2003’s Monster, which ended with a Charlize Theron Academy Award win. Jenkins is a bit unproven otherwise though, since Monster she hasn’t directed another feature. Her only credits are in TV, but the silver lining is that all three series were critically acclaimed. For a budget conscious WB, Jenkins could be a great pickup as future talent. They might be hesitant to hand control over to someone without much of a track record though.

I’m going to echo the sentiment of our writer, Joe Buttice, and pick MMA hottie Gina Carano for the role. She has the beauty and the strength to pull off the famous Amazonian princess.  There aren’t many actresses out there that look like they could kick your ass, but Carano fills that role nicely. Anyone who has seen her in Haywire knows that her brutal action moves could be an easy fit for Wonder Woman. To top it all off, she has the dark beautiful look needed for the role. Her only downfall might be her size. Carano only comes in at 5 feet 8 inches, which is a bit short for an Amazonian. Movie magic can do wonders though.