3. The Books of Magic 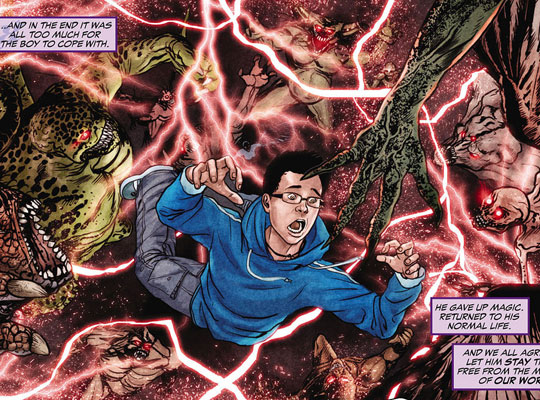 Not long after the Harry Potter novels became popular, comic book nerds (including myself) decried the series as a rip off of Neil Gaiman’s series The Books of Magic. In the series, a young boy realizes he has the potential to become the world’s greatest magician. He was bespectacled orphan raised in the Mundane world (Muggle world) who had a pet owl, who happened to be a powerful magician, the two characters were inevitably going to draw comparisons.  However, Rowling has said to have never read the series, and writer Neil Gaiman believes her claims, as he insists that the similarities are superficial.

Nonetheless, the series is owned by DC, a subsidiary of Warner Bros. who owns the rights to Harry Potter. Now that the series is over and has made them billions of dollars, they might go looking for another magic boy who can turn into some box office cash for them. Why not use a character already in their stable? The series shares enough similarities with Potter, but offers a completely different tone to not seem like a rehash.

Believe it or not, Warner Bros. was wanting to adapt the series before the Potter series even hit their radar. Unfortunately, like many projects, it’s stuck in development hell. Warner Bros. can not find a script they want to take into production, and due to this the production has been shelved.  Not all hope is lost though. Right now book series aimed at young adults are still among the hottest properties out there. Books of Magic doesn’t have the type of built in audience like Twilight, Harry Potter, or even Hunger Games, but it appeals to the same demographic which could make it a valuable property down the line.

The bad news is last time there was a chance of it moving into production, the story had changed so much that Gaiman advised his readers not to expect anything like the source material. Still, with those scripts sitting there for years, there is hope that the next crack at it will yield something more in line with fan’s expectations.

In 2007 Vaughn directed the Gaiman adaptation, Stardust. Add in the fact that Vaughn also has previous comic book experience with Kick-Ass and X-Men: First Class, and you have a sure fire winner. I predicted after Layer Cake that Vaughn would become one of Hollywood’s most sought after directors. He has a flair for visually exciting action set pieces, and keeping a level tone. Stardust is easily his weakest film, but the film still had a unique feel, and personally it was one of my favorite of the year.

Vaughn currently has a lot on his plate with producing responsibilities for the X-Men series, directing the new Kick-Ass film, and a few other smaller projects. One would think that he would take another shot at a Gaiman property, especially one as well regarded as The Books of Magic.

Once Ender’s Game is released later this year, Butterfield will become one of the hottest young actors working in film. Already having shown he can lead a production in Martin Scorcese’s Hugo. Butterfield has tackled the task of playing Ender in Ender’s Game. When the production is finished, he’ll be the perfect age to take on the role of Tim Hunter. It’s unlikely they’d be able to get anything moving so soon, but if the role were cast today, Butterfield would be the perfect choice.

Next Page: Y: The Last Man