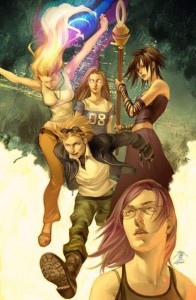 This is going to confuse a lot of people, but this story has nothing to do with the current film starring Kristen Stewart and Dakota Fanning. (Although, you can check out our review here.) Nope, this has to do with the adaptation of the Marvel comic, Runaways. Nick and Norah’s Infinite Playlist director Peter Sollett has been tapped to helm the adaptation.

Created by Brian K. Vaughn (currently a writer on ABC’s hit series Lost) and artist Adrian Alphona. Runaways tells the story of a group of teenagers who find out that their parents are actually super-villains. The teens go on the run from their parents, and try to unravel the mystery behind their heritage, and also stop the doomsday event their parents may be planning.

The film has been optioned for a while, before the Marvel and Disney merger, which means that the film will be released under the Paramount Pictures banner. However, if the project does not move forward soon, Marvel will once again gain the property back.

Brian K. Vaughn has proved himself to be one of the best writers Hollywood currently has to offer. I’ve only read the first volume of Runaways, and it was good enough for me to buy every issue. There aren’t a lot of comics that cater to all age groups these days, but Runaways manages to walk that fine line perfectly. It should make a solid release.