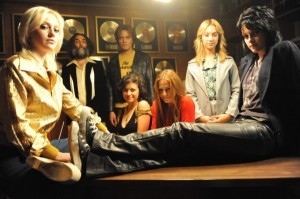 You know you’re in for a tale of female empowerment when the first frame of the film features menstrual blood. Such is the case with The Runaways, the story of the world’s first all girl rock band [not true, there were several in the 60s]. Kristen Stewart and Dakota Fanning star as Joan Jett and Cherie Currie (respectively) as the film follows the rise and fall of the legendary and influential band as they wind their way from day jobs to playing dives to rockin’ arenas and, eventually, all the way back to day jobs. They were formed in 1975 by Kim Fowley (Michael Shannon), a record producer who was equal parts band manager, Svengali and huckster; the film is as much his story as it is theirs. Shot on Super16, the film captures the feel of the era with its gauzily distressed look, harkening back to a time when you could smoke on an airplane, people danced to rock music and a girl with tattoos was a “rebel” instead of “soccer mom.”

The film, to its detriment, focuses primarily on Jett and Currie. There are a number of reasons for this. First and foremost is the fact that Currie (who wrote the book upon which the film was based) and Jett (who serves as one of the film’s Executive Producers) have a strained relationship, to put it politely, with lead guitarist Lita Ford. A revolving door of bass players (they had SIX during their four year run) doesn’t help matters any. And one of those bass players now being a powerful (and litigious) entertainment lawyer couldn’t have made things any easier. In fact, the film skates the bass player issue entirely by compressing them into one fictional, and practically silent, girl named Robin (Alia Shawkat). It’s this “silence” that proves to be the most problematic as it appears to be contagious. Not counting a few early scenes involving drummer Sandy West (Stella Maeve), the other members of the band scarcely get more than twenty lines of dialogue between them.

The first half of the film is much stronger than the second half. Perhaps it’s because, when it comes to rock bands, they might rise differently but they all fall the same: drugs, hubris and excess. But the film has fun showing us that “girls will be boys.” Whether it’s rocking out on stage, having sex with groupies or urinating on a chauvinistic headlining bands’ guitars, these girls are just as capable of participating in rock-n-roll antics as their testosterone-laden counterparts. However, for all of the film’s grrrl-power-chic feminist rhetoric, the band seems to succeed as much from a combination of novelty and sexuality as it does from actual talent. Fowley’s ever-increasing demands to sexualize the underage group meet little if any resistance. And by the time they do push back, the band has all but collapsed.

Shannon, in the role of band manager Fowley, continues his hot streak. He is perhaps the most underrated actor working today. He stole the show with his Oscar nominated turn in Revolutionary Road and gave a stunning performance in the misunderstood psychological thriller Bug.

Fanning gives a strong performance as the focal point of the band’s skanky sort of sex appeal. Currie is a wounded bird who is never quite at ease in her role as jailbait provocateur and it’s a feeling the 15-year old actresses is no doubt familiar with. She perfectly encapsulates the coming-of-age-conundrum of being simultaneously empowered with, intrigued by, and frightened of the new found affect that she has…not only on boys but on men.

Stewart on the other hand, as Jett, is serviceable in the role. She admittedly is given less to work with which is more the fault of the screenplay than of Jett herself. Jett, from her first moment on screen, arrives in the movie fully-formed buying her first leather outfit (from the men’s rack no less). She’s confident, determined and matter-of-factly out-of-the-closet. What she isn’t is “interesting.” She goes from scene-to-scene with the singular purpose of forming a band. But little if any insight is given as to what drives her. The end result being that, try as she might, Stewart never really rises above the level of Hollywood starlet playing dress-up.

On a scale of 1 to 10, with 10 being Naked Under the Leather and 1 being Satisfaction, The Runaways gets a 6.