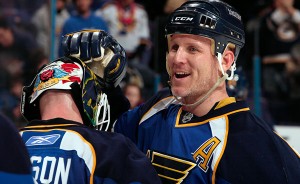 I was talking with my father today about Keith Tkachuk. We were discussing our first major memory of the prototype power forward who would go on to be one of the most iconic players on the Blues in the past decade. Our memory was the same one, it was of Tkachuk at the 1997 All-Star game. There was a mic on Walt (the nickname he earned as a player, most likely after Walter Tkaczuk, a center for the New York Rangers), and Walt was affectionately ribbing his contemporaries. I knew from that moment that we were dealing with a spirited individual, and even though he played for another team, I couldn’t help but respect him.

Cut to the 2000-2001 season, the Blues are battling for another shot after blowing their President’s Trophy season in the first round of the playoffs. With twelve games left to go in a promising season, the Blues make a move to help their playoff hopes. The trade is one for Keith Tkachuk, a leading power forward who can add some more strong offense, for Michael Handzus, Ladislav Nagy, and Jeff Taffe. The move is well worth it, and the Blues make it past the second round for the first time in ages. Unfortunately, even with the added depth they still fall to the Colorado Avalanche, the year’s eventual Stanley Cup Champions.

It all seems so long ago, now this 38-year-old veteran is leaving the league.  This gritty, hard nosed player has battled his way to 427 points with the Blues over the span of  541 games. He is one of only four players players to have reached the milestone of both 2,000 penalty minutes and 1,000 points. Altogether, Walt has played 1,201 games, 538 goals, 527 assists, totaling an amazing 1065 points. His 538 goals puts him as the second highest scoring American ever, right behind Stars forward Mike Modano, who also had a tearful goodbye to the city of Dallas in a win against Anaheim last night.

Walt finished his career in St. Louis with the kind of style only a future Hall of Famer like himself could, with two assists. He probably would have also added a goal to his point tally, but a premature whistle from the referee nullified his goal. His two assists help the Blues pull out a regulation win over the Anaheim Ducks. The final score was 6-3.

The home fans gave Tkachuk a standing ovation before and after the game. After the game he was honored by the fans, and he told them, “Thank you very much, you’ll be seeing me in St. Louis the rest of my life.”

I know this Blues fan laments the fact that we missed the playoffs this year, but I think it is more upsetting that a player like Keith Tkachuk will no longer be on our roster. I wish him the best of luck, and I hope to run into him around St. Louis from time to time. Thanks for the memories Walt!