6 Movies Featuring Motorhomes, In Honor of ‘We’re The Millers’ 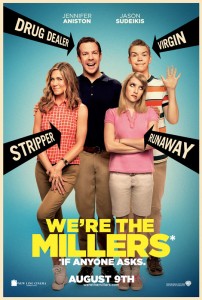 This week We’re the Millers hits theaters. Jason Sudeikis plays a smalltime pot dealer forced to smuggle a large amount of marijuana across the Mexican border. In an effort to evade the law he assembles a fake family consisting of a stripper (Jennifer Aniston), a teenage runaway (Emma Roberts) and a nerd who lives in his apartment building (Will Poulter). Then he piles them into that most middle-class of vehicles – the motorhome.

So that’s a lot to choose from when creating a list: pot, drug smugglers, Mexico, fake families. But those were too easy. And we here at ReviewSTL.com don’t like to take the easy way out. So here’s your list… Movies featuring Motorhomes. Hmmm… we need six of these things, right? Ok. Here we go.

Simon Pegg and Nick Frost have created something of a cottage industry deconstructing American genre films. The two Brits first breakthrough film was 2004’s zombie comedy, Shaun of the Dead. They followed that up with 2007’s action parody, Hot Fuzz. What made both films work so exceedingly well was a palpable affection for their source material even as they skewered genre conventions. In 2011 the two teamed up with Seth Rogen in the sci-fi comedy, Paul.

Pegg and Frost, who wrote the film, star as unabashed sci-fi geeks on their first trip abroad. They have journeyed across the pond in order to attend that Mecca of nerd-dom: San Diego Comic-Con. After leaving Comic-Con the pair embarks via RV on a tour of famous UFO sighting locations. It’s during this trip that they encounter Paul, an alien (the space kind) on the run from a secret government agency. Paul, as voiced by Rogen, is precisely what you’d expect: a pot smoking, fast-talking, laid back hipster with a heart of gold. That is to say, it’s precisely what you’d expect of Rogen not necessarily of an alien.

If the film has a downfall, it’s that at times it’s more clever than actually funny. Replete with sci-fi references both obvious and obscure, at times the laughs feel more akin to nerdy self-congratulation merely for having been in on the joke. And some of the film’s characters are nothing more than straw-men set up for the sole purpose of knocking them down: Rednecks are dumb; Christians are narrow-minded. That being said, there are plenty of laughs to be had. Pegg and Frost have a great chemistry and even manage to extend that to the CGI’d Paul. – TOK