“I HOPE THEY SERVE BEER IN HELL” is playing at Ronnies 20 in St. Louis. Watch the Red Band Trailer. 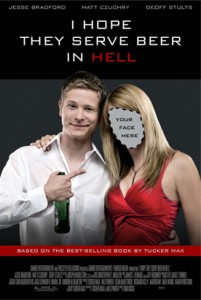 , that has spent four years on New York Times Bestseller list. Based on the ridiculous real life adventures of a guy named Tucker Max, the story revolves around a bachelor party that Tucker talks his friends into going to. He has one of his best friends lie to his fiance to do so, and ends up getting banned from the wedding as a result of their drunken debauchery.

This is the first starring role in a film for Matt Czuchry, who plays Tucker. The cast also includes Jesse Bradford, who we have seen in many movies (Hackers, Clockstoppers, Romeo + Juliet, and Swim Fan to name a few). Geoff Stults (Wedding Crashers, The Break-Up) plays Dan, who is the best friend that is getting married.

From the red band trailer, it looks like a pretty funny movie. There are show times at Wehrenberg Ronnie’s 20 Cine for today if you want to check it out.

About the Movie:
I Hope They Serve Beer in Hell–based on the shocking, ridiculous and hilarious real life adventures of Tucker Max–is the story of an impromptu bachelor party gone horribly awry thanks to a midget, a fat girl, a gaggle of strippers, an overly destructive public intoxication ordinance, and the consequence of Tucker’s unflinching narcissism.

A tireless and charismatic novelty seeker, Tucker (Matt Czuchry) tricks his buddy Dan (Geoff Stults) into lying to his fiancée Kristy (Keri Lynn Pratt), so they can go to an legendary strip club three and a half hours away to celebrate Dan’s last days of bachelorhood in proper style. Tucker drags their misanthropic friend Drew (Jesse Bradford) along for the ride, and before they know it Tucker’s pursuit of a hilarious carnal interest lands Dan in serious trouble with his both the law and his future wife.

The ensuing blowout leaves Tucker uninvited to the wedding and ankle deep in a mess of his own creation. If he wants back into the wedding and the lives of his best friends, he’ll have to find a way to balance the demands of friendship with his own narcissism and selfishness.

Directed by Bob Gosse (Niagara, Niagara, Julie Johnson), Tucker Max and Nils Parker co-wrote the screenplay adapted from Max’s book I Hope They Serve Beer in Hell, which has spent four years on New York Times Bestseller list. The film is produced by Darko Entertainment’s Richard Kelly, Sean McKittrick and Ted Hamm along with Max and Parker’s Rudius Films. Max Wong and Karen Firestone of Pinkslip Pictures also produced along side Aaron Ray of The Collective.

Darko Entertainment and Freestyle Releasing will release I Hope They Serve Beer In Hell on Friday, September 25. The film is Rated R by the MPAA for nudity, strong sexual content including graphic dialogue throughout, language and some crude material.