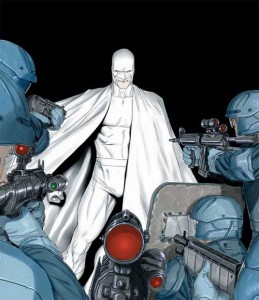 Mark Millar has had a surge of popularity in Hollywood as of late.  The Scottish comic book writer has seen adaptations of his popular comics Wanted and Kick-Ass, both of which turn normal comic book conventions around. Now, Tony Scott has been penciled in as director of his latest series, Nemesis.

Nemesis is about Matthew Anderson, a man similar to Batman’s Bruce Wayne, whose billionaire parents were killed at a young age. His whole life is then devoted to avenge their deaths. The difference? Anderson’s parents were notorious villains, and he follows in their footsteps as the world’s only super villain, Nemesis. The hyper-violent story mirrors the well known story of Batman, but what if Batman had used his skills for evil rather than good? Well, he’d become a highly tuned killing machine that no one could stop.

In the comic book series, Nemesis targets high profile police chiefs, and brings the system down over their head. He then targets a police chief in Washington D.C. named Blake Morrow, and makes him pay for taking down his parents years earlier.

20th Century Fox have picked up the rights to the film, but currently have no one writing the script.  Only time will tell when this film will actually go into production. Scott has a full plate in front of him currently, and the comic book series is still only on issue number two.

I’ve read both of the first issues of the comic, and I don’t see how 20th Century Fox is going to make something they can market. They are going to probably butcher the story, much like they did with Millar’s Wanted, to be able to get anything out of it. Most likely, they will follow closer to Nemesis’ counterpart, police chief Blake Morrow. I doubt they’ll stick as close to the story as Millar and Matthew Vaughn did with Kick-Ass. Only time will tell.