Sprint Serving Up Almost Twice the Data of Competitors

A recent study performed by Validas has crowned Sprint as the new King of Bandwidth Hogs. When compared amongst the Big Four, the results from 47,000 phone bills spanning the last twelve months put Sprint’s numbers at almost twice the average per month than the competition. It should come as no surprise: Sprint is the only wireless provider that still provides truly unlimited data usage. No throttling. No data caps. No overage fees. 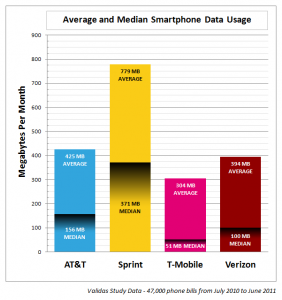 As smartphones come with bigger and badder hardware to push the limits of what we can access while on-the-go, there is a greater need for speedy delivery of that info. Even with “4G” technologies still blossoming here in the United States, many users are making the leap from dumbphone to smartphone and opening a 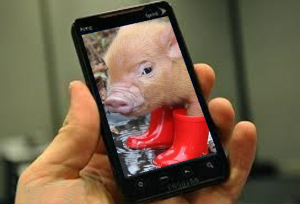 world of information at their fingertips. The easier it is to do something, the more likely you are to do it. If you can turn the lights off in your kitchen without getting up from the couch, you’re going to reach for that smartphone app. Similarly, if you can do all your banking, purchasing, and emailing at close to (or faster than) your home land-line internet connection, then that 4G radio is in for some work!

With this newfound demand for faster wireless data transfer comes the need for carriers to upgrade their networks. Indubitably, this does not come cheap. Cell phone plans nowadays are drastically different than from a couple years ago. You no longer simply tick the check-box for “data? yes plz“, but have a selection of tiers and prices to choose from. Then there’s the fine print: You cannot go over X amount of bytes. If you do, we’ll throttle your speeds down to a frustrating level… or we’ll just overcharge you. 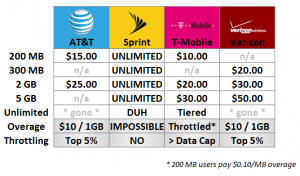 The Big Two, AT&T and Verizon, have done away with unlimited plans completely. Both carriers are throttling the Top 5% (AT&T starting on Oct 1st) and charging $10 per GB overage. Verizon takes their throttling a step further and carries those slower speeds over to the next month as a form of punishment. T-Mobile adds some flexibility by offering many “Unlimited” tiers of varying data cap limits. Downloads are throttled back to 2G speeds once you pass your data cap. T-Mobile customers are not charged for overage in “Unlimited” plans, although their 200 MB “Simple” plan charges $0.10 per MB overage along with throttling your speed.

You can easily see that Sprint is catered to the data-hungry. I imagine most users on the other carriers are constantly living in fear of overages and leeching off of Wi-Fi as much as possible. Being a smartphone owner myself, I can definitely understand the worry of being somewhere without free Wi-Fi. Being a Sprint customer, I never have to worry that there isn’t one. However, some real world usage could share some insight. 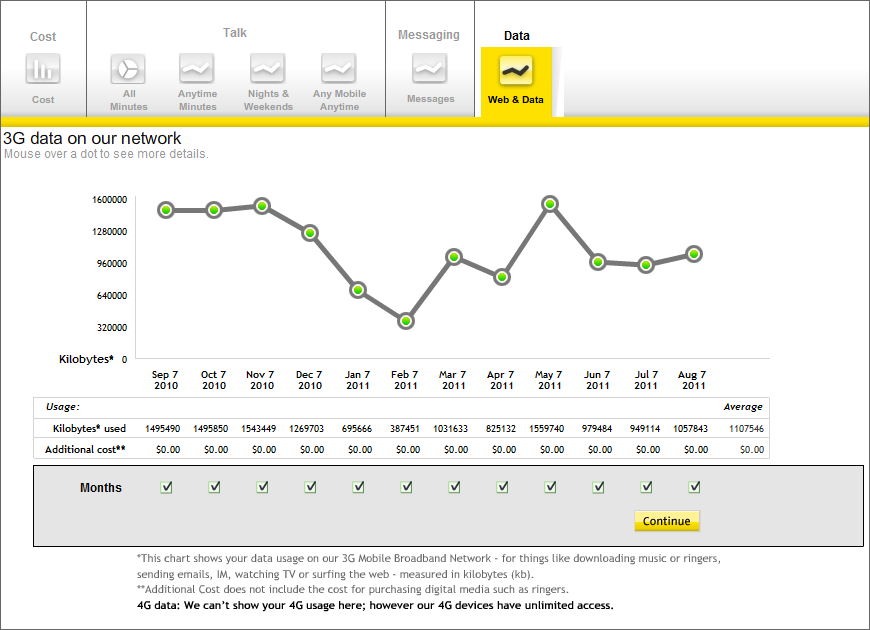 Just looking at my 3G data consumption over the past 12 months (4G data is not included), it shows I can survive with a 2 GB data cap. The only time I’ve gone over that limit was when my home internet connection was down, and I had to tether my data connection to my desktop computer. I consider myself a “moderate power-user”, so it seems like 2 GB might be a suitable limit for me. AT&T claims that 98% of its subscriber base also stays below that 2 GB threshold.

If you are constantly streaming apps like Pandora, Spotify, Audiogalaxy, etc. or watching insane amounts of YouTube videos using your data connection, then I wouldn’t be surprised if someone reached that 5 GB mark. Probably the only real surprise for me here is seeing a median monthly download of 51 MB coming from T-Mobile users. I use 51 MB on my lunch break!