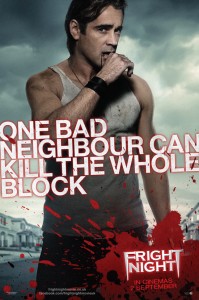 Remakes can be quite a mixed bag. On one had, you have a lot of people who are versed in the source material, and on the other hand it is twice as hard to make an original product. As remakes have become more and more popular throughout Hollywood, the flair in which they approach them has changed.  Some of them re-imagine the series completely (ex: Star Trek) while others make an inferior product to the original with hopes of scoring a quick buck (example: almost every other horror remake to date). Thankfully, Fright Night turns out to be one of the more endearing remakes, and possibly the best horror remake yet.

Charlie Brewster (Anton Yelchin) has risen to the top of the social strata of high school, despite the fact that only a couple years ago he had been LARPing in his backyard with his best friend, Evil Ed (Christopher Mintz-Plasse).  Charlie has even managed to start dating one of the most popular girls at school, Amy (Imogen Poots).  Things start to unravel quickly as Evil Ed informs Charlie that his new next door neighbor, the brooding and good-looking Jerry (Colin Ferrell) is a vampire.  At first Charlie assumes that it is just another desperate attempt by Ed to dive into a world of fantasy, but as Ed and others stop showing up to school the theory becomes more likely.

Moving forward Charlie decides to enlist the help of “Fright Night” Magician, Peter Vincent (Dr Who’s David Tennant).  After a series of confirmations about Jerry’s vampire status, Charlie, Charlie’s mom (Toni Collette), and his girlfriend Amy are on the run from Jerry, who is desperate to create a new clan of vampires in Las Vegas.

It is quite refreshing to see vampires scary and mean again, because the latest Twilight craze has neutered their ferocity in many other stories as of late. Colin Ferrell plays Jerry with a lot of snark, a bit of smoldering sexy, but he is not romanticized much, rather than feared.  There isn’t any question that Jerry is a bad guy, his moments of humor are only created in the moments he plays with his prey before descending upon them for the kill.

David Tennant might not be a household name here in the US like he is in the UK, but he could be making a name for himself stateside soon if this role is any indication. He steals the show as the Criss Angel styled magician who has a background in vampires.  His role is probably the best realized adaptation from the old film, and they update him with a flair more relevant to the current decade. Tennant easily defuses tension in a situation, and creates a number of funny moments within the final 45 minutes of the film.

The rest of the cast is serviceable, they never really rise to the same level as Ferrell and Tennant, but they aren’t really given as much juicy material as them either. Yelchin continues to prove himself a versatile young actor. He’s impressed me in just about everything he’s been in, but at times almost seems too mature of an actor to be playing high school roles anymore.

Marti Noxon, who has her fare share of experience with vampires after writing numerous episodes of Joss Whedon’s Angel and Buffy the Vampire Slayer, takes a break from TV script writing, and does an admirable job of balancing all the aspects of a modern horror film. Director Craig Gillespe never falls back into the all too popular torture porn genre that is sweeping modern horror, and instead focus on tense action and witty dialogue. I’m a bit too dismissive of the horror genre as of late, but if more were like this film I could probably enjoy the genre more as a whole.

If you are looking for a fun action horror hybrid, Fright Night is a great movie to see over the weekend with friends.  It is easily one of the more approachable horror films of the past couple years, and despite it being a remake it separates itself enough from its original to not tire itself out for fans of the original.