The weather cools, fall softball is in full swing, the baseball pennant race winds down, and every weekend there is an absolute plethora of football.

I’m pretty happy the NFL managed to avoid a lockout that would have compromised its regular season, and in the coming weeks I’ll be writing a Rams preview. My true football love, however, is the Missouri Tigers.

During Gary Pinkel’s tenure, the football program has flourished. Normally considered an afterthought, enough progress has been made that Missouri’s become a contender for a BCS bid. In 2007, Missouri came within a win of going to the BCS championship; last year, Missouri knocked off a team ranked number 1 in the BCS standings for the first time in history.

Many programs still have a built-in edge due to geography and tradition, but Missouri’s carving out a name for itself in the Midwest. Last year’s team finished 10-3 with a disappointing bowl loss to Iowa, but this year’s incarnation returns enough talent and experience to be ranked 21st in the preseason USA Today poll. I’ll split my preview into two parts, one for the offense/special teams and one for the defense.

We’ll start with the offense, which, after years of being the centerpiece of the team, now might be the most tenuous part. Electrifying playmakers such as Brad Smith, Danario Alexander, and Jeremy Maclin absolutely brutalized opposing defenses with their ability to stretch the field. Chase Daniel mastered the spread offense and set several team records. 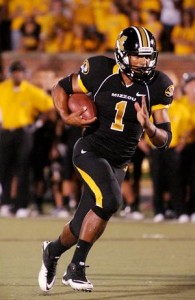 All eyes will be on Franklin this fall.

Replacing first-round pick Blaine Gabbert at quarterback will be James Franklin (6-2, 215), a true sophomore from Texas. Franklin was the only other quarterback to see action last season, so with the off-season transfer of Tyler Gabbert, he pretty much assumed the role of starter. In limited action, he was 11 for 14 for 106 yards with one TD and one pick. He also ran for 116 yards and two TD on 23 carries. Franklin’s considered a dual threat because of his ability to scramble, which is somewhat coincidental given that Blaine actually ran faster than James. Franklin’s arm strength isn’t as high as Gabbert’s, but given our receivers won’t stretch out the field too often, this might not be a huge problem.

Missouri’s got six quarterbacks on its official roster, but the only two quarterbacks who figure to actually see the field (barring catastrophic injuries, of course) are Ashton Glaser, a redshirt sophomore, and Corbin Berkstresser, a true freshman who committed to Missouri during his junior season. Glaser was a three-star recruit coming out of Arkansas, and given he’s had two years to absorb the system, he’ll most likely get the nod over Berkstresser. Corbin did come from a spread offense and put up big numbers in high school, but given his novice, will probably be redshirted this season unless some law belonging to Murphy pops up.

Last year’s dismissal of starter Derrick Washington forced Gary Pinkel and staff to use a committee approach, and it worked, sort of. The tandem did produce an average of 156.4 yards per game, but there was no clear-cut number one.

Missouri will still be using the system, although Pinkel has made it known he’s looking for one starter to step up and take over the reins as the number one.

De’Vion Moore was the de facto number one last year, leading the team in carries (99), yards (517), and touchdowns (8). As a senior, he’s the elder of the class. Marcus Murphy saw limited action, but accumulated 181 yards on just 22 carries, an average of 8.2 yards per carry. Henry Josey was second on the team in yards with 437. After the team scrimmage last weekend, however, it looks like the front-runner for starter is Kendial Lawrence, who broke two 60-yard touchdown runs. Last year he averaged 5.8 yard per carry and scored four touchdowns. He also added 56 receiving yards.

This was supposed to be a considerable asset coming into the season, and it may still be. The offensive line was set to return four of its starters, losing only Tim Barnes to graduation. Last week, left tackle Elvis Fisher, a three year starter who had made 40 consecutive starts suffered a knee injury during practice and will be lost for the season. This will force Pinkel and co. to adjust accordingly. Travis Ruth, Austin Wuebbels, Jack Meiners, Dan Hoch, Anthony Gatti, and Jayson Palmgren are among the Tigers expected to rotate in and out. Missouri has done a solid job in recent years of recruiting solid offensive linemen, and hopefully this will provide them with the depth to weather the loss of Fisher without having to force one of their other highly-ranked recruits from last year, Nick Demien and Mitch Morse, into action before they’re ready. In recent years, Missouri’s had one of the more consistent offensive lines; given the track record, this shouldn’t be too much of an issue this year.

This is far and away the strongest asset of the offense. In recent years, Missouri’s become a factory for producing elite tight ends, and last year Michael Egnew earned first-team All American honors, joining Martin Rucker and Chase Coffman in becoming the third Tiger in four years to do so. Egnew became a dependable target for Gabbert, catching 90 passes (most among tight ends) for 762 yards and 8 touchdowns. A senior, he’ll be expected to help ease Franklin into the role of starter.

TJ Moe was the leading receiver for the Tigers last year, catching 92 passes for 1,045 yards and 6 TD. He’s not a top-end burner in the mold of Alexander or Maclin, but he did torch San Diego State for the game-winning 68 yard touchdown last season.

Jerrell Jackson had 50 receptions for 656 yards and three TD. Jackson might pose the biggest deep-threat on the roster, but his inconsistency has prevented him from becoming the top target.

Wes Kemp rounds out the top four for the Tigers’ receiving corps. I’ve always been fond of Kemp, mostly because he hails from my alma mater, DeSmet, and I will always remember how he destroyed Hazelwood Central’s defense in the 2005 state title game, pulling in 11 receptions for a ridiculous 246 yards. Last year for the Tigers he caught 39 passes for 420 yards and three TD. During the Insight Bowl against Iowa, he made perhaps the highlight reel catch of the year. At 6-4, 220, he’s the biggest Missouri receiver and isn’t afraid to block, but inconsistency has also prevented him from staking his claim to number 1.

With the change in personnel over the last few years, Missouri’s had to adjust its offense accordingly. Without a consistent deep threat, Missouri has to rely more on short routes and its running game. This could be one of the more inconsistent years in recent memory, given the uncertainty of the offensive line and Franklin’s ability to run the offense. Missouri faces a tough early schedule after hosting Miami (Ohio) September 3, traveling to Arizona State September 9 and top-ranked Oklahoma September 24. How well they perform in those two games could set the tone for the rest of the season, as their toughest remaining games (Oklahoma State, Texas, Texas Tech) will all be at home.