Review: Portman and Kutcher Have “No Strings Attached” in Film About Friends With Benefits 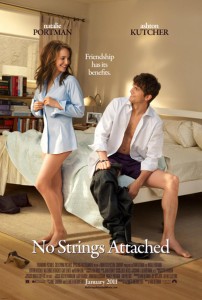 Ivan Reitman returns to the director’s chair for the first time in half a decade with “No Strings Attached.” The story is about two people who meet as kids and later reunite as “sex buddies” in adulthood.  Although the premise is interesting, but hard to believe there would be much depth to the story or characters.  Luckily an A-list cast at least keeps things interesting.

Adam (Ashton Kutcher) and Emma (Natalie Portman) have known each other since they met at camp as kids.  As they grew up, they were never extremely close – but ran into each other from time to time and became friends.  As adults, Adam is an assistant on the set of a TV show similar to “High School Musical” and Emma is a doctor working 80 hours a week during her residency nearby.  After learning some troubling news about the break-up with his girlfriend, Adam starts binge drinking – only to end up on Emma’s couch completely naked in the morning.  From there the two get to talking, which progresses into more than talking, and their “no strings attached” relationship is born.

Although the idea behind the film is pretty unique (that is until Justin Timberlake and Mila Kunis star in “Friends With Benefits” later this year), it is a pretty typical romantic comedy at heart.  Although Ivan Reitman has made some pretty mediocre films as of late, he is a legendary comedy director who has directed and produces some of the most iconic comedies in history.  I was hoping that he would add a little something to the movie that would take it up a notch.  Although it was much better than the rom-coms that were out this time last year (“Leap Year,” “When In Rome” to name a couple), it didn’t have what it takes to make it great.

Before seeing the movie, I only watched a television spot for it once. Knowing that it was called “No Strings Attached” and having seen the couple of minutes of footage, I pretty much had it pegged before I ever stepped into the theater.  Boy meets girl; boy likes girl; girl doesn’t reciprocate feelings; things get worse before they get good.  Pretty typical stuff in a romantic comedy.

Luckilty what at least kept things interesting for me was the two leads in the film.  Ashton Kutcher has been more and more likable in his past couple of films for me, as surprising as that is for me to ever type.  He was one of the best parts of “Valentine’s Day” last year, and the same goes for this one.  He plays a really likable character, and overall nice guy.  The fact that bad things keep happening to him makes you feel sorry for him, and the underdog thing really works.  As for Natalie Portman, she is just an incredible actress and someone who I really respect.  Ever since the first time I saw her in “The Professional,” she has blown me away.  Her performance in “Black Swan,” which she will win the Oscar for best actress at the Academy Awards for later this year, backs up just how talented the actress is.  She is great on-screen, and keeps you wondering how she will play such a unique role.  She does a great job, and reminds me a lot of her character in “Garden State.”

There are a handful of other actors in the film that help make it at least fun to watch.  Kevin Klein is definitely one of them, who play’s Adam’s father.  Alvin is an actor who is famous for a TV show he starred in called “Great Scott,” where the character would commonly repeat the show’s title as his catch phrase.  Klein is a great actor, who does a great interjecting comedy into the scenes he is a part of.  He is probably one of the funniest parts of the entire movie.  Jake Johnson plays Adams best friend, who is also very charismatic and likable.  Mindy Kalling (Kelly Kapoor from “The Office”) is hit or miss, and Lake Bell is great as Adam’s nerdy yet charming superior at his TV job.

Although “No Strings Attached” doesn’t show us anything we haven’t seen before, it is definitely a unique spin on the romantic comedies that we are far to often exposed to.  It is nice to take a break from the same old boring story, and at least get a grown-up version to watch.  Although there are some editing problems that keep things from running smoothly, the two leads make up for it and almost make it forgivable.  Ashton Kutcher and Natalie Portman are fun to watch get into their predicament, and that is the film’s saving grace.  It’s a fun movie for date night, but don’t expect too much more.

“No Strings Attached” is a C