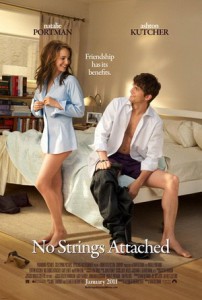 The Hollywood rom-com assembly line spits out this month’s entry with No Strings Attached. While Ashton Kutcher and Natalie Portman play characters that have names there’s little reason to relay them since no one discussing this movie will ever refer to the two as anything other than “Ashton Kutcher” and “Natalie Portman.” He’s an aspiring television writer trying to live down his famous father’s career. She’s a driven doctor on the tail end of her residency. Portman doesn’t believe in love, or more specifically, love that lasts. So when Kutcher pursues her, she convinces him to embark on a relationship that’s purely sexual. But since the “rom” in in “rom-com” stands for “romantic,” I think we all know how this is going to turn out.

The film follows standard genre conventions. The two have the customary “meet-cute” (three of them in fact). They each have a wacky best friend (wonder if they’ll hit it off?) and a Greek chorus of acquaintances that exist for no other purpose than issuing “delightful” quips regarding the romantic ups and downs of our two protagonists. Now, in all fairness, every genre, from action to art-house, has its clichés; ultimately all that matters is the execution. And compared to the recent slate of romantic comedies, this one isn’t half-bad. Portman is game and tries like hell to save middling material. And I know I should I hate Ashton Kutcher but for some reason I just can’t bring myself to. He seems to have a self-awareness of his own douche-baggery that is disarming and, counterintuitively, makes him somewhat likeable. But the film just can’t rise above its format.

The film has an episodic feel that gets tiresome and makes the movie feel longer than it is. There are numerous subplots that were clearly intended to lead somewhere but ended up on the cutting room floor instead. The two most glaring dead-ends being Portman’s fascination with an older doctor (Cary Elwes) and her flirtation with a younger doctor (Ben Lawson). The film takes great care to set up both storylines, only to never return to them.

There are a few jokes that work but most fall flat or are merely mildly amusing. And the chemistry between Portman and Kutcher never quite gels. Or, perhaps the problem is that they gel too much. They are infinitely more believable as a couple comfortably in love than they ever are as sexually frenzied lovers unable to keep their hands off of each other.