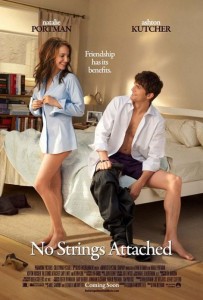 This line really has nothing to do with the plot or message of the film. I was just pleasantly surprised they used one of my favorite Albert Einstein quotes in the movie.

Returning from a brief review-writing hiatus thanks to a stay in St. Mary’s ICU, I was hoping that something awesome would be coming out, like Chuck Norris fighting sharks while Rosie Jones does jumping jacks in the background, but no luck on that. Katie insisted on seeing No Strings Attached instead. I’m pretty sure the last few movies I’ve done were chick flicks, but I surrendered. I had some extra passes, so my friend Lauren came out with us.

I guess rom-com writers and directors have finally acknowledged the long-suffering guys who are dragged to see these movies, because the last few I’ve seen have all had a more vulgar, direct sense of humor than those of years past. There’s a lot of fresh humor in the genre that even guys will laugh at, giving them a form of hope for the movie-going experience other than one shaped like boobs. Director Ivan Reitman was responsible for one of my favorite movies growing up, Ghostbusters, so I expected to at least be moderately entertained.

The movie follows the friendship of Emma [Natalie Portman] and Adam [Ashton Kutcher], who first meet at summer camp. The film moves forward as they occasionally bump into each other as they get older. As time progresses towards the modern day, they find themselves meeting up once again after college. After Adam finds out his father [Kevin Kline], with whom he’s had a rough relationship since his father left his mother, is now in a relationship with his ex-girlfriend [Ophelia Lovibond], Adam decides to go through his phone to find some, uh,  female companionship [sex]. After a night of binge drinking, he wakes up naked in Emma’s apartment. After a brief sexual encounter, they decide to continue their relationship on a “friends with benefits” level, agreeing they have no desire to become emotionally attached.

But the best-laid [heh…best-lay] schemes of mice and men often go askew, and ultimately Adam and Emma both find themselves desiring more, even though Emma attempts to remain in denial. Forced to stay strong for her mother after her father died, Emma has portrayed herself as emotionless and distant. In this instance, however, she is forced to face her true feelings after her mother tells her it’s alright to be vulnerable sometimes, saying, “Be hurt…the world can take it.”

There are a number of genuinely funny parts in the film; the scene involving a mixed CD is particularly hilarious. Most of the dialogue tends to flow naturally. Unfortunately, there doesn’t really appear to be a lot of chemistry between the main characters. Kutcher is accustomed to his role as lead male in these films, and he does a solid job, but he’s never overwhelming. Portman is better, but this isn’t a film that will stand out at the end of her career. It isn’t meant to, though; it’s meant to entertain, and on this level, the film does a terrific job. Kevin Kline turns in a good performance as a father trying to reconnect with his son. His talk with Adam at the end is well-delivered, reminding Adam that we can’t really choose who we fall in love with, outside of ordering Russian brides.

There are a few other knocks against the film. It doesn’t really flow very well. Just like the last rom-com I saw, Love and Other Drugs, the film must balance its humorous and serious scenes, but too often it switches from one to the other and back immediately. As a viewer, I was caught between laughing and trying to take in the scene. Essentially, the film goes up and down more quickly than Ron Jeremy in his Oscar-winning moments.

The biggest gripe I have comes in the overall course of the movie. The thing about romantic comedies is that they almost always turn out happily. It’s very difficult to make a romance film appeal to the female audience without doing so; this film tends to fall into familiar patterns after the first half and by the climax, there isn’t much creativity involved. The last few scenes are beyond predictable; Adam’s last lines and actions are cheesy beyond belief. To me they were, anyway.

Of course, this could be why I’m single.

As we left, I heard a couple of sniffles from women around us. Lauren and Katie both seemed to enjoy the film. Katie in particular described it on her and my car ride back as one of the better films she’d seen in a while. In the end, the film does a good job with its main task, which is to entertain. The film also addresses an issue that’s become popular with young adults, the idea of sex with one person without becoming attached to them, which for the most part is impossible. Emma has always protected herself by refusing to lower her walls, because she views love like poker: you can’t lose what you don’t risk.

The problem is, you can. And that’s what resonates long after.

No Strings Attached gets a B.