“Let Me In” Viral Marketing Campaign Continues; Rubix Cube, Now and Laters, and Romeo and Juliet 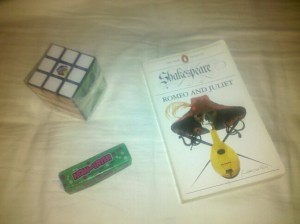 After being sent a bloody funnel in a police evidence bag, and a postcard sent in Morse code, it was nice to get some stuff I can use from the people behind Let Me In. This time they gave me an old beatup copy of William Shakespeare’s Romeo and Juliet, a package of watermelon Now or Laters, and a Rubik’s Cube. Not to shabby right? But what do these have to do with a vampire movie?

You have to remember that Let Me In is set during the 1980s, and both Rubik’s Cubes and Now and Laters were both very popular during the decade. I have a feeling this is the end of the viral materials I will be receiving for the film, but it was refreshing to get something from the film that didn’t give me a shock at first.

What do you think? Will you be seeing Let Me In when it hits theaters?