Land of the Lost 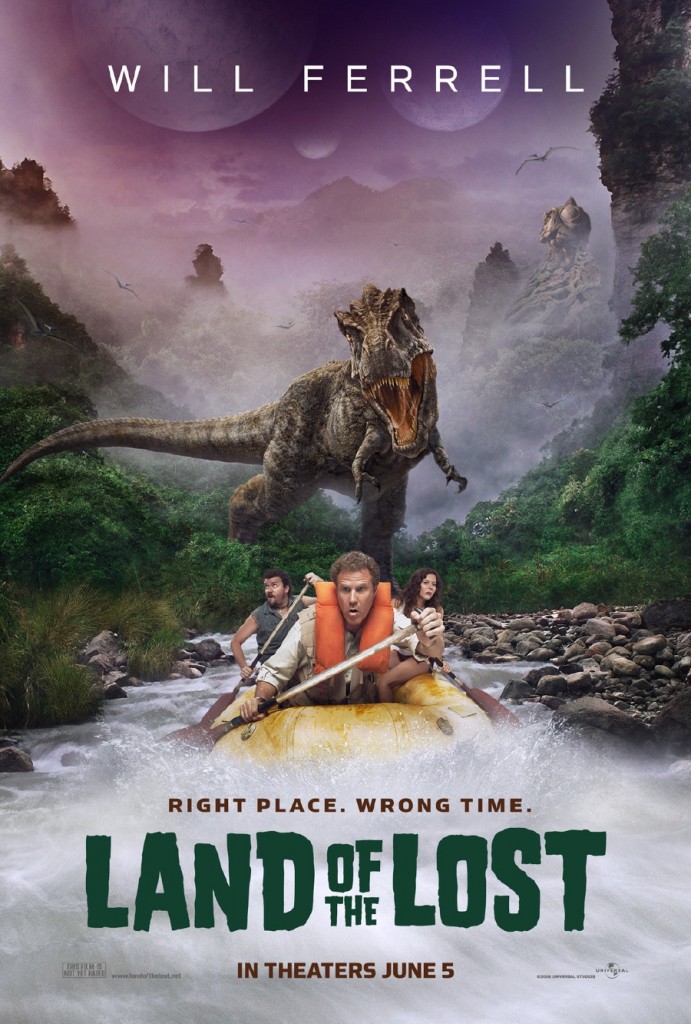 So, this summer has already seen one remake of an older series with slightly cheesy effects. We all remember how that turned out? Well, did Land of the Lost turn out as well? Ah, well that might be a bit of a debate for some.

Dr. Rick Marshall is a scientist who has been laughed at from everyone from YouTube users to scientific colleagues. Why is that? Well he believes in time warps and alternate dimensions. We first meet him and his crazy ego on the Today Show with Matt Lauer, where he showcases his craziness. Matt Lauer’s questions incite him enough that he freaks out and becomes a viral video hit. Cue to three years later and he is a staff scientist at the La Brea Tar Pits who is as much of a joke to everyone as he was three years ago. When a beautiful scientist, Holly Cantrell (Anna Friel), comes to him and tells him he is brilliant and must finish his work, he gains the momentum (through a series of fast food binges, great for product endorsements) to finish his Tachyon Amplifier. They field test it at a shady tourist stop and are led into a cave of wonders by odd Will Stanton. That’s when things get crazy. They are thrown into a virtual ‘Land of the Lost’ where everything from dinosaurs to displaced ice cream trucks exist. Along with some help from their ape like friend Chaka they try to find the Tachyon Amplifier to get themselves back home.

Land of the Lost is very entertaining in parts and contains lots of laughs. It’s biggest problem is that it can’t decide what it wants to be. At one moment it does funny sight gags which will be more than entertaining for children who want to see the movie, but in the next scene it is all crude sexual humor. Instead of being an adult comedy or a family comedy it tries to be both. Not many parents are going to take their children to a movie which features massive amounts of breast fondling. Most of the humor isn’t too risque, but enough of it is that it probably isn’t appropriate for a audience younger than teen or pre-teen.

The humor is the main draw for the film, and it can be hit or miss at times. There are a few references thrown in here or there to the original series, including a scene where Ferrell sings the original theme on his banjo. Although, this is the kind of film that might lend itself to a few more self-referential throwbacks. Land of the Lost isn’t as big in pop culture as Star Trek is, so a lot of the winks and nods might have gone easily missed. There are a couple really good jokes that were wasted in the trailer such as the, ‘Matt Lauer can suck it.’ line.  It didn’t get nearly as many laughs because it has been wasted in just about every piece of marketing for the movie so far. A lot of stuff was wasted in the trailer, there is enough funny material though to keep you laughing and entertained throughout the whole movie.

Will Ferrell once again shows his natural comedic ability. I’m beginning to wonder though just how long he can continue to play the same character and people still find it funny? It seems to have worked for many other comedians, so maybe for quite a while. I think he might be out shined by his co-star in this one. Danny McBride is probably the funniest of the main cast. He seems poised to carry his own major comedy film soon. It’s only a matter of time until he becomes one of the next big comedy stars. With friends like Ferrell and Seth Rogen it might be sooner than you think. Anna Friel who might be new to a lot of the US audiences does an admirable job with her character, but the supposed chemistry between her and Ferrell’s Dr. Marshall character is never believable. In fact there is so little chemistry between them that I think the audience might have believed she would hook up with Will first.

Overall, Land of the Lost suffers from an inconsistent tone. It sets itself up as a fun family friendly looking picture with all kinds of slapstick humor, but in the end wants an adult audience. Had it just stuck to the family friendly comedy route it looks like it could have been immensely more successful.

I give Land of the Lost a C.

Brad Silberling’s latest adaptation is a silly, funny, and fun adventure tale that uses all of its assets to great effect, from the actors, the camp silliness of the original show, and the tongue in cheek fun of the premise.
Dr. Rick Marshall believes in quantum paleontology, time travel, and parallel universes. Upon writing his book and appearing disgracefully on the Today Show, Marshall becomes the laughing stock of society over his taceon time travel machine and theories left to pander to children working at the La Brea Tar Pits. When a young and attractive British graduate student, Holly Cantrell, comes to meet Marshall and tells him how his work inspired her to study all of his work, he gets the boost he needs to finish his taceon machine. The two set out to a site Holly informs Marshall of that has high taceon energy and the two of them and their local guide Will are thrust into a worm hole of some sorts that takes them into another dimension where past, present, and future all exist together. The threesome is trapped in the dimension due to the loss of the taceon device that got them there and enlisting the help of a local ape looking man, Cha-ka, the begin on a search for their chance to head home.
Now there is a bit more intrigue to the story beyond this, but the story isn’t the main reason we are here, we are here to enjoy some good silly fun with a couple of the best comedy actors working today. And Silberling and crew deliver in spades with a nice tight script that scurries along to get us to the Land of the Lost and is filled with a number of quality jokes from start to finish. The film relies on well written jokes and improvisation from the leads and doesn’t crutch itself on poorly conceived sight gags that the trailer sells it as. The film is nothing like what the trailer is selling it as and is actually quite the fun little adventure with a lot more going for it then a CGI T-Rex running around. The T-Rex in questions is actually a fairly realized character that works well for the picture and is used to very good effect for some solid laughs.
The film is also very self aware of what it is and what it is trying to do which really allows us to just sit back and have fun at the silliness unfolding for us. Everyone involved is in on the joke and even while they are poking fun a bit at the original show they embrace the world that was created by it and have some good, goofy, fun in said world.
The few actors in the film though are all solid as well which really helps one enjoy the picture. Now, I understand some people just don’t “get” or like Will Ferrell and Danny McBride, but for those of us that do there is a lot to enjoy here. First off though, props to Jorma Taccone who plays the ape boy/man Cha-ka as he creates quite a bit of humor using nothing more than his arms and legs. And I am also glad to see Anna Friel get a big time movie to show off in because she is great and needs to be in far more stuff. She is a rugged and adventurous scientist here and is there more for looks than humor, but she provides some laughs along the way and is excellent eye candy to boot. Now to the boys in which Will Ferrell and Danny McBride just get to have some fun doing what they do best at being silly, crude, and a bit over the top; but without becoming to much of a caricature and keeping the characters grounded as someone you could meet in the real world. Now granted, these guys aren’t doing anything terribly original, especially for them, but they are doing what the do very well and if you are a fan you are going to have some fun.
In the end, Land of the Lost is a fun and silly adaptation of the original series. There are plenty of laughs and the film moves right along and never overstays its welcome. There are a couple of real surprises and one or two great scenes in the film but it doesn’t excel to a level of greatness that all three of our main actors have participated in. That said, if you are fans of the two male leads comedy, or the Anna Friel’s body of work they all do a good job and there is enough fun and homage to the original show for fans of the series to enjoy themselves as well. There are a few movies I would recommend that are out before I would send you along to this one, but if you enjoy the parties involved you will not be disappointed with this one in the end.
Land of the Lost is a B-