My Life in Ruins 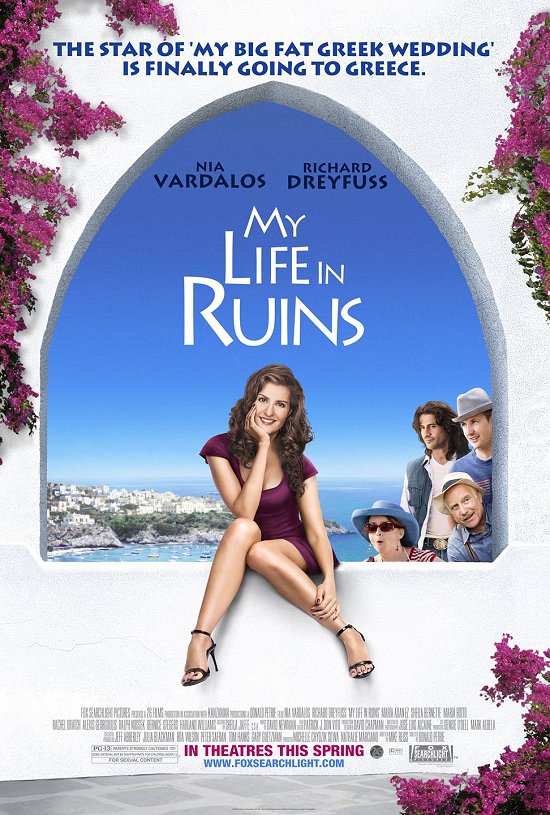 Nia Vardalos hit indie gold with her 2002 hit My Big Fat Greek Wedding.  Besides a little pit stop with 2004’s Connie and Carla she has been pretty absent from the world of film. Is her latest film a grand return to the screen after years of absence? Sadly, no.

Getting your kefi back or mojo as most people would put it is not such an easy thing for Georgia. She’s been recently let go as a professor of classical history at the University of Athens in Greece, so what does she do? She becomes a tour guide so she can show everyone the beauty of ancient Greece. The only problem? None of the people who take her tour like her and she bores them with endless facts they don’t care about. Her boss gives all the good tourists to her rival at the tour agency, Nico. She gets the shaggy driver who is called “Poupi”, a bus without air conditioning, and obnoxious Americans who care about nothing more than knickknacks. There is always a “funny guy” who has to ruin things for her. This time the funny guy is an American named Irv (Richard Dreyfuss) who at first annoys her but shows her how to get her “kefi” back. Add on top of all this a love interest in the aforementioned shaggy bus driver Poupi.

This film does have a few endearing moments, it tends to get over shadowed by all the cliched moments that come straight out of Romantic Comedy 101. Only a few characters have actual depth the rest of them are instead over the top caricatures that unfortunately do not entertain. It is all the more frustrating because at times you can seem glimpses of a formulaic film that can still be fun. From the onset when you meet the obnoxious Americans you can tell where this story is going. There is even a part where it talks about the lovely Canadian tourists. Haven’t we seen this in about twenty other movies? It wasn’t very funny the first couple times, what makes you think it would be funny this time?

The biggest redeeming quality of this film is Richard Dreyfuss.  He is the only character with a some what believable story arc. You can understand his pain, and why he is on the trip. He also appears to be the least self-involved of any of the characters. Dreyfuss is great at playing a character who has a sly intelligence and a father like feel. Pretty much every moment in the film that is good is one that involves him.

Here’s another thing I want to ask Hollywood. Can we ditch the whole surprise he/she is hot thing. It’s so obvious even with his scruffy hair and full beard that Alexis Georgoulis is a good looking man that it isn’t a surprise at all when the other characters realize it. It’s an old story convention that needs to die a quick death. If not, lets make it a little harder to spot? In fact Georgoulis’s character is chock full of movie cliches. He’s the character who isn’t who he appears to be. Handsome and also even though he is a bus driver for a tour agency, he is very sagely. I was wondering if it was a language barrier that made him choose to play such a tired character.

Nia Vardalos’s return is shaky from the start. From the voice over at the beginning and end that just isn’t needed and is as stiff as I have heard in a while, to the Stella Got Her Groove back moments, she isn’t bringing anything new to the screen. The positive is that she looks better than she has ever looked before. You can see why she might be the object of affection for certain men in the film. Her transformation from being disliked for being boring, to tour guide favorite is so quick that you believe the characters are just as stupid as they look.

At one point in the film I started thinking to myself, ‘This isn’t toooo bad.’ Unfortunately the postcard ending ruined almost any positive sentiment I could have had for this film. I love a happy ending, but when it is wrapped in to tight a package like this it comes off as corny and a bit cheesy. Let’s hope that Vardalos’s next film this summer I Hate Valentine’s Day which reunites her with her Big Fat costar John Corbett.

My Life in Ruins gets a D.