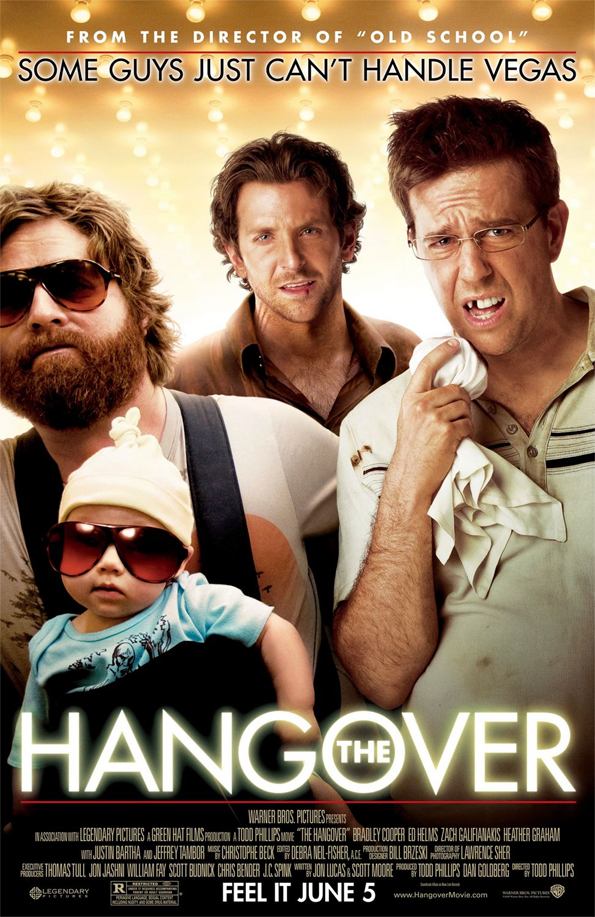 Well, here’s the good news. The Hangover gives you none of the side effects listed above. The great news? It is probably one of the funniest comedies I have seen in a long time.

The Hangover follows a quartet of friends celebrating a friend’s marriage in Vegas.  As they start out for the night, they toast their friend Doug and his soon to be marriage. The next time we see them they are in shambles in their pricey Vegas villa. It appears the mayhem of the night before was on a colossal scale. A chair in the main room is smoking for some odd reason, there is a chicken wandering around, Ed Helm’s character is missing a tooth, and worst of all there for some reason is a tiger in the bathroom. Normally this type of absurdity doesn’t pay off well. In this film it pays off in spades. Immediately you are left wondering just how could they have caused this amount of destruction and to top it all off, not remember it?

This is a comedy that is destined to be a breakout hit. Like Todd Phillips’s previous big hit Old School, it combines just enough juvenile humor with a talented comedic cast. The marketing for this one is already in full gear, the best thing this film is going to have going for it is word of mouth. It is easily accessible and doesn’t make you think too much, which is a great thing in this kind of comedy. Be prepared for a couple months of people repeating lines and/or scenes from this movie ad nauseaum.

The thing that really makes this movie shine is the cast. I’ve been saying for years that Zach Galafanakis’s unique brand of humor would eventually break out. He’s been slowly creeping into the cultural radar. If we are going to keep comparing this to Phillips’s Old School then Galafanakis’s character Alan is the “Frank the Tank” of the bunch. Wildly amusing, but just not quite there. It should also be noted that the popularity Old School really launched Ferrell from his SNL days to his leading man comedy roles. Galafanakis never seems to be playing for laughs, his character is really just a loveable moron who says things that while seem innocent are dirty and a bit hilarious. Without him this film doesn’t work.

Another person who looks posed to breakout big from his role in this film is Bradley Cooper. Cooper is an actor many people probably recognize but don’t know his name yet. Most people remember him as ‘Sack’ from Wedding Crashers, but you probably remember seeing him playing buddy to Matthew McConaughey in Failure to Launch (which also had Hangover buddy Justin Bartha as the other friend) and to Jim Carrey in his most recent comedy Yes Man. If you want to see why he has breakout potential just watch the ladies in the theater when he comes on screen. I couldn’t help but hear what they thought of him. He probably gets to crack the least amount of jokes of the ensemble, but he is also the rock that holds it together. He plays a guy who you can’t help but admire but at the same time you know has got to be a bit of a jerk. He follows that line so close and pulls it off effortlessly.

Ed Helms is easily recognizable as a correspondent from The Daily Show or as Andy from The Office is in his biggest film role yet.  His character Stu is the spineless friend who has a girlfriend who beats him and is about as controlling as they come. He gets to advance his character probably more than anyone else in the film. His lost tooth looks uncomfortable and even more so when you find out Helms actually took out a real false tooth for shooting. He has great comedic timing and his sarcasm is great, hopefully we will continue to see him do more film roles.

The story follows those three characters for the majority of the film. Justin Bartha has to sit out most of the film since he is the missing friend Doug. The scenes he is in however he casts a good likability to himself and hopefully we’ll see more of him in the already rumored greenlit sequel. Ken Jeong is probably the supporting character that leaves you remembering the most. His effeminate and brutal Mr. Chow has some great scenes and lines that will have you rolling. The always funny Jeffrey Tambor is in this for about two scenes and he gets laughs each time (makes me miss Arrested Development). Heather Graham, Rachel Harris, Mike Epps and Mike Tyson all have small parts that are pretty entertaining, if a bit limited.

If you are planning a bachelor party for a friend any time soon, just fair warning you will never be able to live up to something like this. It might be fun trying though, right?

I give Hangover an A.

Todd Phillips returns to form after a series of floundering pics with this bachelor party gone bad comedy that keeps the jokes coming and rarely misses a beat from start to finish.

Doug is getting married and the male celebration commences with his son to be brother in law Alan, and best friends Stu and Phil heading off to Vegas for a night on the town. Stu is a whipped dentist that has a raging bitch of a girlfriend, Phil is a disgruntled married middle school teacher, and Alan, well Alan has never left the confines of his wealthy family and is a tad bit socially awkward. The four toast to the night on the roof of their hotel overlooking the city only to wake up the next morning in their trashed hotel room, unaware of anything that happened the night before and missing their groom Doug. The three begin retracing their steps with the clues they have laid before them and their wild night begins to unfold as new hijinks fall in their path.

I won’t go into the plot to heavily with this picture, but the trailer and this synopsis is more than enough to get a grasp on what you need to know whether this picture is up your ally. The movie though does deliver the laughs and rarely a joke falls flat which is the sign for a good comedy, which this is. Most of the gags are quite funny and for every one that feels a bit tired and unoriginal, there are a few that feel fresh and are unexpected. Phillips also crafts a fast paced and actually very fine looking film with some surprisingly cool shots and homage’s thrown in for good measure. Also, props to the writers and editors for making this thing as quick and tight as possible and realizing less is more sometimes.

The actors in the film are also quite good across the board as well. Ed Helms as Stu is a delight and gets to bust out of his role in the office as the loveable loser to a dirty mouthed friend. I think Helms is the funniest in the film, followed closely by Galifianakis as the awkward Alan. Galifianakis gets the most set ups and attempts at one liners in the film, and he usually nails it, but Helms has the overall funniest bits and scenes I think. Bradley Cooper plays Phil, and is a bit of an asshole that we can’t help but like. While not getting as many jokes as the other two, Cooper holds his own with the two comedy vets and proves again that he is a diverse star in the making and is a more than capable male lead for the picture. Heather Graham is solid and still looking good in the few scenes she gets and Ken Jeong continues the trend of just being almost overwhelmingly silly and hilarious as a loud mouthed high roller.

In the end, The Hangover is well worth your time and will have you laughing from pretty much start to finish. It might take another viewing or two before we can properly place it with comparable comedies, but this potentially has the legs to get better on repeat viewings especially once I can actually hear some of those little bits that are drowned out by laughter with a big crowd. In fact, the Hangover is kind of in a tough spot coming out around a couple of superior and fantastic comedies that I just recently have viewed, Up and Away We Go, and if I hadn’t seen those I might have lauded more praise upon this one. But as it goes, this stands a pretty good comedy coming out among a couple of A+ pictures around it and that is saying something for sure and I am looking forward to seeing this again sometime and the eventual sequel.

The Hangover is a B+