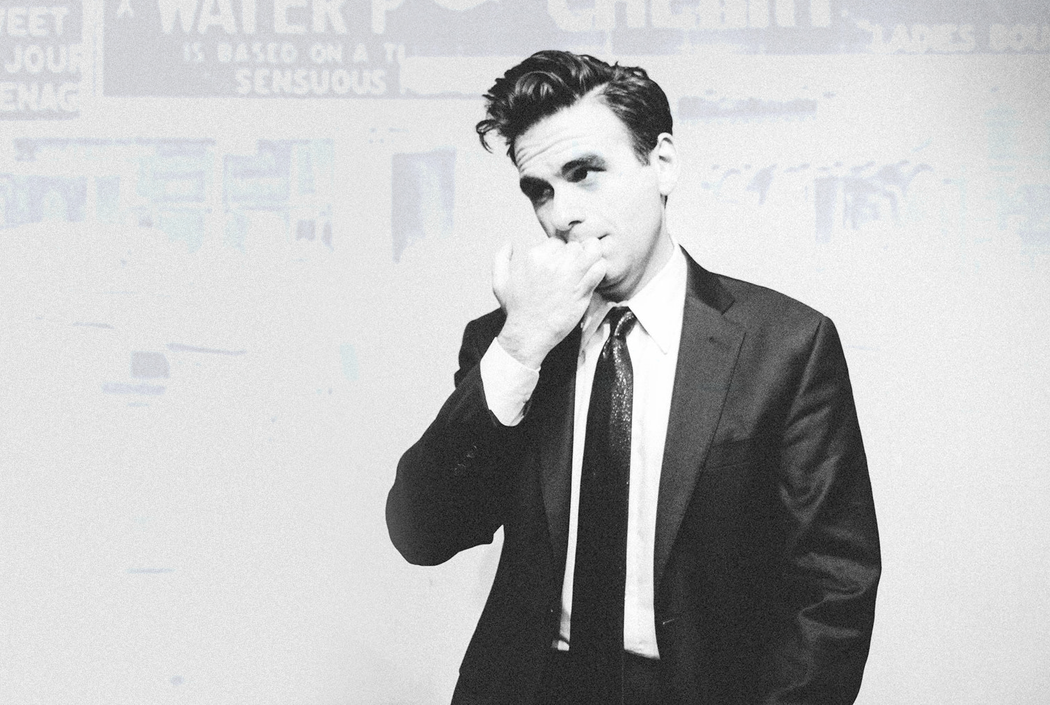 The hit musical Be More Chill just opened on Broadway in March, and here we are at the end of May getting a new production opening in St. Louis. 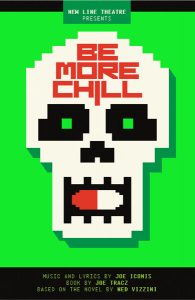 Thanks to New Line Theatre, and Artistic Director Scott Miller’s seemingly supernatural ability to uncover incredible shows, the rights to produce the musical were secured before it hit Broadway. And now theatergoers in STL are lucky enough to save themselves a thousand miles of travel (not to mention thousands of dollars) to see one of the hottest tickets on The Great White Way.

We were lucky enough to speak with Joe Iconis, Tony Award Nominee for Best Original Score, about his amazing show and what life has been like the past few months.

The composer has spent the past twelve years working toward this moment, and couldn’t be happier.

“Since I started all of this, the thing that I wanted to do – my dream – was to have a show that I cared about on Broadway. And so the fact that I have a show on Broadway is truly a dream come true. I feel like as crazy as life is, it is so much better to be doing this – and to have a show that is in production on Broadway – than not. I feel like I’ve been at a maximum level of productivity and stress for twelve years, so if that has to continue – or ratchet up – I’m really happy that I got this sweet run going.”

Iconis gives credit to his Broadway cast and compares the show to a living thing as it evolves.

“The amazing thing is that we have this incredible group of actors. The people who populate the world of Be More Chill, it’s like the most glorious collection of character actors there ever was. There’s no one in the show who’s phoning it in. There’s no one in the show who’s just giving the exact same performance every night. And so, these people are excited to do the show. And excited to play around. So whenever I go to see it, there are new shades that people are finding – and new moments that people are finding. So even though we are technically not change anything, it does feel like the show continues to grow and develop. It’s like a live thing, and feels like a musical theater rock concert in that way.”

Be More Chill was adapted from the 2005 novel of the same name by Ned Vizzini. It was recommended to the composer not to turn into a musical, but rather just to read. But he knew instantly that this story could perfectly translate to the stage.

“The book was actually given to me by my agent. And not in a way like, ‘Oh, this needs to be adapted into a musical.’ He just read it and said , ‘Listen, I read this book and it really remind me of you. So give it a read and see if there’s anything in it that you connect to.’ Of course, as soon as I read it I was like, ‘Oh yeah, I one hundred percent need to write this musical.’  And that’s kind of how it all started. I immediately connected to the characters, and love that they felt so archetypal – but they didn’t behave the way that the classic archetypes are supposed to behave in a teen comedy. The nerdy, leading guy had a lot more depth than you typically see. The stoner best friend didn’t behave in the way the stoner best friend normally behaves. And so I was immediately attracted to these characters.”

Then he says that the thing that really hooked him was when the story took a sci-fi turn.

“I immediately got so excited about exploring these heavy issues, like anxiety and depression, and these things that plague us as a society as adults and as kids. I love the idea of exploring them through this wild, sci-fi lens. And I love the idea that people walk in to Be More Chill and for the first twenty minutes think that they are seeing this sort of seeing this classic teen comedy story. And then all of a sudden, from out of nowhere, the sci-fi component gets thrown in.  It’s all an apt metaphor for what it feels like to be a young person, when your body is changing and the world seems to be going crazy around you. And you don’t know how the hell it happens.”

Over the past decade or so, we’ve seen an increase in musicals reaching the mainstream and which feel very personal, dealing with topics like mental health. 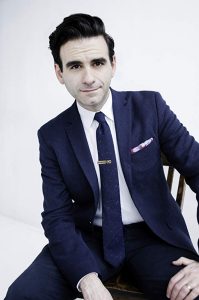 “I think that as a society we are we are becoming more attuned to things that are happening under the surface.  I think that in previous times, it was really easy to dismiss or ignore some of the harsher aspects of society. And sort of easy to explain away things, especially mental issues. Mental illness is something that for so long, was really kind of swept under the table and not wanted to be dealt with. So I think as a society, as we deal more with it and are confronted with it – these things that our parents and grandparents never had to deal with. And the fact that we just receive all this information via social media. I think that kind of stuff can’t help but seep into the art that’s being created. A cool thing that the internet has done is that it’s sort of democratized art, and it’s allowed for these weirdo shows like Next to Normal, and Dear Evan Hansen, to share the same space that more traditionally commercial shows have shared.”

Iconis says there’s still a lot of work to do in getting shows more shows like Be More Chill to Broadway, but we’re getting there.

“It’s really exciting to feel like there’s space for some other stuff now. Like everything, it takes a while to change. You have shows like Spring Awakening and Next to Normal that came from nonprofit theaters. So for a while, it felt like if you’re a weirdo show the only way to get to Broadway is to have a critically acclaimed run at a sparkly, nonprofit theater.  And that gave us a lot of amazing musicals like Once, or The Band’s Visit.  But that’s why it’s been so wild – Be More Chill had a path that was so not that! I would have loved it if it was that, but it just wasn’t.”

He says it’s not easy for a show to survive off-Broadway.

“The other thing that is pretty insane is that the off-Broadway scene has become so challenging. Because of the economics of it, it’s so impossible to have a musical off-Broadway. So many times in my career, I’ve had a show like Bloodsong of Love, or even like Be More Chill, where I’d say that I think it’s a commercial show and if given the opportunity, a lot of people would really respond to the show. A lot of times, people who are sort of the keepers of the keys of the theater scene would say, ‘Well, that’s more of an off-Broadway show.’ And I always felt like, dude – sorry, there’s no place for me to do these shows. Because the economics make it so there’s no such thing as a Little Shop of Horrors that can open and run off-Broadway in today’s day in age.  The only place for a show like mine to go is the nonprofit theaters, and those places are doing shows by Kander and Ebb, and Pulitzer Prize winners. It’s been a crazy time navigating the theater scene. But I love that Broadway is becoming this place where these massive, mega-musicals like Frozen and King Kong can exist alongside shows like Be More Chill.”

Be More Chill had quite the amazing journey itself, going from almost finished to being one of the hottest tickets on Broadway.

“It was something that could have happened in 2019, because it was social media that brought the show back. People – actual human beings – discovered it. And because we live in a time when art really is democratized, people were talking about our show in the same breath as Dear Evan Hansen. And in 2019, music and art sort of live in this cloud – this neither here nor there place. So many people who are obsessed with Be More Chill just did not fully understand that it wasn’t playing somewhere. They just sort of assumed that the show was on Broadway, and they loved it as such. So the show went viral, and it was the most organic thing of all time. So many people ask me how I did it, and the answer is I literally did nothing. I just wrote a show for myself, potentially – which is who I write all of my shows for – and I hope that anyone else will connect with them. Young people connected with it, and it organically became this massive, viral sensation. And the crazy thing is, as much as it’s something that only could have happened in 2019, it’s the most old-school thing. It’s just word of mouth: people listening to the show, and really liking it, and telling other people. It’s someone listening to ‘Michael in the Bathroom,’ and being like, ‘Oh my God, you’ve gotta here this song!’ The most age-old thing, but just the delivery mechanism and the way it happened is something that only could have happened now.” 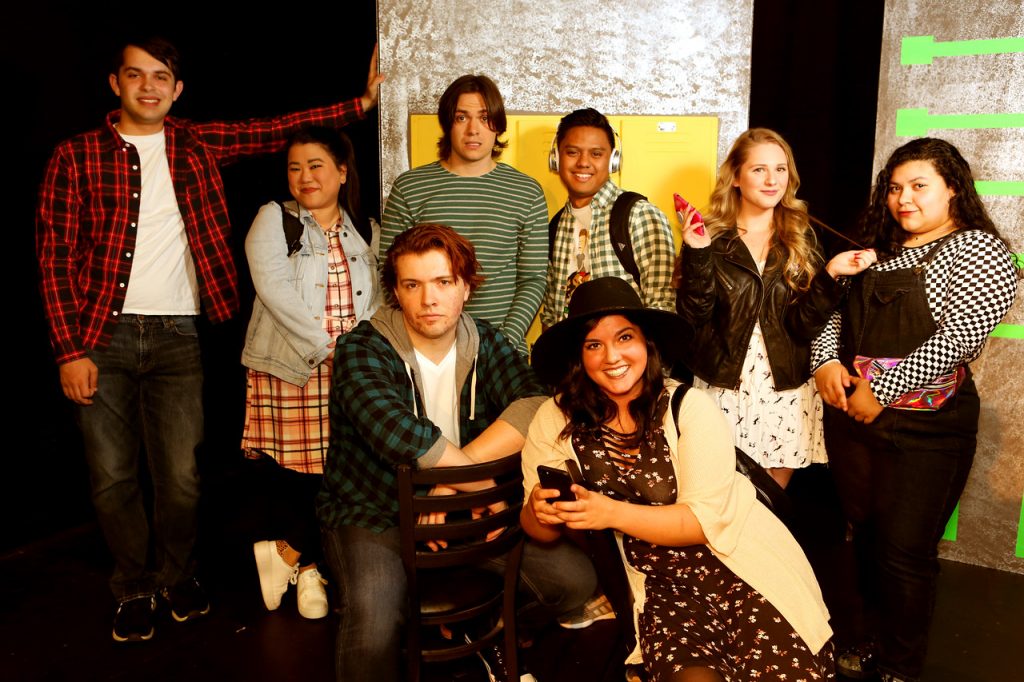 The cast of Be More Chill at New Line Theatre.