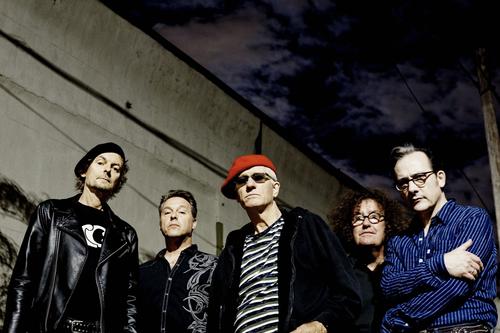 The first British punk band to release a single, The Damned returned to Delmar Hall on May 29th to celebrate the 40th anniversary of their prolific third album, Machine Gun Etiquette, with a concert that obliterated any doubts that there was still plenty of gas left in the tank.

Machine Gun Etiquette is a beast. Ahead of its time, it still snarled and punished like their previous offerings, but featured a more cohesive unit experimenting with new styles and textures.

Playing the album’s eleven tracks in their entirety, The Damned wasted dispensed with all formalities by opening up with Love Song before moving onto the album’s title track and a potently crunchy version of I Just Can’t Be Happy Today.

To not call the ensuing barrage an assault would be a grave injustice as the band. Frontman Dave Vanian, commanding the stage with his cropped hair, dark glasses and sporting a seriously cool undertaker vibe set the tone of the evening’s brisk set.

After more than four decades of punk/Gothcrooning Dave Vanian’s voice still personifies the dark of night. Still vigorous in vocal cadence and delivery, Vanian has survived his rambunctious punk without losing his mystique.

Joining the band live for the first time since 1988 was bassist Paul Gray, who along with Captain Sensible formed a raucous rat–tat–tat rabble of noise that propelled the set through scorching versions of Anti-Pope, These Hands and Plan 9 Channel 7.

After making an off the cuff joke about the size of his nose, Vanian and the band plunged into a frantic version of

Noise, Noise, Noise before reminding the audience that The Damned were a band that always has no qualms with flaunting their influences. This set the stage for one of the evening’s best moments in a searing cover of MC5’s Looking At You.

Bolstered by the kinetic energy of an appreciative crowd The Damned fired on all cylinders as they took their seminal album into the home stretch with crushing versions of Liar and the epic Smash It Up (Parts 1 & 2).

While Machine Gun Etiquette allowed The Damned to fully from sonically it by no means defined them. This was clearly evident in the songs they played afterperforming their prolific album. From the punchy So Messed Up to tattered and ragged Twisted Nerve, The Damned ran roughshod over selections from their back catalog, much to the delight of their devout fans.

Vanian then reminded the audience that May 27th marked the birthday of his idol, St. Louis’ Vincent Price who served as the inspiration for the track 13th Floor Vendetta, a song performed here with ferocious energy and determination.

The Captain, Vanian and Gray, joined by Pinch on drums and Monty Oxymoron on keyboards slackened the set’s tempo with

two songs, Standing On The Edge of Tomorrow from last year’s Top 10 album, Evil Spirits) and Street of Dreams (from 1985’s Phantasmagoria), two songs stitched together with psych popunderpinnings.

Originally performed on an episode of The Young Ones, Nasty, (the clear–cut winner for audience favorite of the night) has become synonymous with the band’s very identify. This was followed by rousing versions of New Rose and their second single, Neat Neat Neat, both of which still feature the fiery rebellion of their early work.

Cohesively, The Damned remain a unit who are comfortable with the mishmash of styles found in the songs of their past without being burdened by them. This aspect of their personality showed up during their encore, which featured a dense take on Curtain Call from The Black Album followed by an intensely potent finale in Ignite.

Garage noise mavens The Detroit Cobras opened the show. And although it has been a while since they reared their ugly heads, they made it abundantly clear that they areback tan, rested and ready.