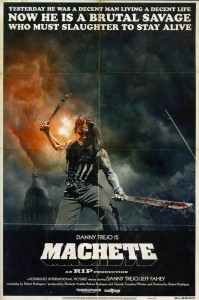 It is approaching the three year mark since Grindhouse was out in theaters, and we were treated to the trailer of Machete. I remember a discussion talking about how the film would be released later that year on DVD.  I waited and waited, but nothing came. Then news started popping up about actors who were signing onto the film, Robert DeNiro, Jessica Alba, Michelle Rodriguez, Steven Seagal, and more. It looked like an extremely eccentric and interesting cast. So, my interest in the project was piqued once again.

Well, it seems like we might finally be seeing a real version of Machete now. It won’t be going straight to DVD, but enjoy at least a small theatrical debut. FOX has apparently acquired the rights to the film for a price of $9 million. Executives from FOX were reportedly shown a small portion of the movie, and it was enough to make them think it is worth the investment.

This ends Robert Rodriguez’s longtime relationship with Harvey Weinstein, and it looks like Rodriguez will now be moving over to FOX. Rodriguez has Machete and the new Predators film coming out later this year from FOX as well.