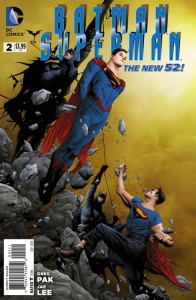 When the New 52 reboot was announced, I was under the impression that the folks in charge would take a similar approach to the reboot back in 1986.  That wasn’t the case.  In 1986 (when the universe was rebooted at the end of Crisis on Infinite Earths) the entirety of the DC Universe went back to beginning.  There was no continuity that the writers had to conform to.  That was not the case when the reboot happened a little under two years ago.  Something’s carried over from the previous stories before the reboot (Doomsday killed Superman, Batman had his back broken by Bane, Sinestro is a Green Lantern).  DC editorial wanted to make their comics more accessable it new readers, but all they have done was make it more convaluted and difficult to understand.

Batman/Superman is exactly what the reboot should have been.  Writer Greg Pak gets it.  He understands that there are no limitations to what he can do.  This is the first meeting at DC’s top two characters.  He’s able to make us as readers understand that Batman has never seen Superman in action before and vice versa.  Then as both men are trying to figure each other out, they are tossed into another dimension (Earth-2) by a new villain (Kayio The Trickster).  Both men come face to face with alternate versions of themselves. On Earth-2, Superman’s parents are alive and he’s married to Lois Lane and Batman is married to Catwoman. 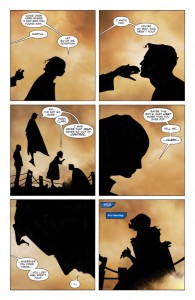 Greg Pak is a very underrated writer.  He has an amazing ability to these super heroes with astounding powers and make them human.  He drafts a heart wrenching scene where Earth – 1 Superman meets his parents from Earth – 2.  If you haven’t read anything from the New 52, Superman’s parents died in a car accident and he never received the guidance from the Kents.  When Clark is able to see his parents for the first time he feels wave after wave of heartbreak and sorrow.  Clark is seeing what his life might have been like had his parents been around to raise him.  On the flip side, the Earth-2 version sees a man that he might have become had he not had the guidance of Johnathan and Martha Kent.  It’s something that was sorely missing from any other version of the New 52 Superman.

In Batman’s case, we see that on Earth-2, Bruce has worked tirelessly to clean up Gotham.  With the help of the Supreme Court, Wayne Tech designed the “cryo-prison” and Gotham changed Arkham Asylum into an Amusement Park. The Earth-1 version of Batman is able to see that there can be a light at the end of this tunnel.  it’s just a matter of getting there.  Plus, the Earth-2 version is married to Catwoman.

The only problem I have with the book, again, is Jae Lee’s art.  I just think it’s too “gothic” for a Superman/Batman story.  It’s perfect if this was a solo Batman story.  The scenes in the Batcave were beautiful.  I will say however, his style fits seamlessly into Pak’s more emotional moments.  There are a couple of great panels where Earth-1 Superman seeing Martha Kent for the first time and feeling nothing but sorrow and loneliness.  Everything is done in silhouettes.  Something about that artistic choice makes the scenes all the more powerful.

I’ve lost count of how many times I’ve read the “first meeting” of Superman and Batman.  Out of all the stories I’ve seen, this is the first one that actually feels like it’s the first time these men have met.  I’m really excited to see this story continue and see what Pak has planned.  Also, if this is any indication of what Pak’s take on Superman is, then his upcoming run on Action Comics will be something you don’t want to miss.