All of us have things in our past we hope will never catch up to us. Demons back that there that keep us up at night.

American Vampire is one of the rare comics that has never had a bad issue.  Some may be stronger than others, but none are bad.  Vampire follows 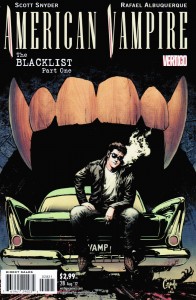 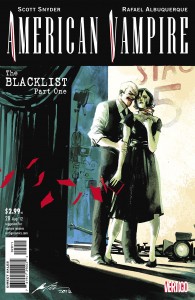 two central characters: Skinner Sweet and Pearl Jones.  We first meet Skinner Sweet in the 1800’s.  He is an outlaw in the wild west who becomes the first “American” vampire.  Since he’s an American, he has different strengths and weaknesses (i.e. sunlight doesn’t affect him at all). Pearl Jones is a struggling actress newly moved to Hollywood.  She is attacked by a European coven of vampires and saved by Skinner Sweet. Sweet gives her some of his blood, turning her into the second “American” vampire. At the conclusion of the story arc “Ghost War”, it looked as if Pearl had finally gotten revenge on Skinner by plunging a golden stake into his heart.

Coming into this issue, Pearl and her husband Henry have been in hiding from the vampire community for almost 30 years.  Henry has been attacked by a vampire and left for dead.  The issue picks up with Pearl capturing the vampire responsible. She lets him see his final sunrise.  With Henry in the hospital, the local vampire coven makes another attempt on Henry’s life.  Pearl realizes that her husband isn’t safe anywhere.  She seeks help in the local chapter of the Vassals of the Morning Star (a vampire hunting organization). The VMS agree to keep Henry safe on one condition: Pearl help track down the coven of vampires that are setting up shop in Hollywood.  Pearl agrees but say she can’t do it alone.  She’s told she will have a partner, none other than… SKINNER SWEET.

Scott Snyder (Batman & Swamp Thing) has been telling this one of a kind vampire story for a little over 2 years, and it never gets old.  Snyder has two advantages on this title.  First, it’s a creator owned book under DC’s Vertigo imprint.  This means that he can say and do pretty much whatever he wants in the book.  There’s no “red tape” when he wants to kill off a character or do something different in the story.  The other advantage is his artist.  The book wouldn’t be same without Rafael Albuquerque.

Rafael got his start at DC on the Blue Beetle book.  He was moved to Superman/Batman for a two issue stint.  He then bounced around from Dark Horse to Oni Press before being picked to be the regular artist on American Vampire. Albuquerque’s style is one that cannot be duplicated.  His use of heavy blacks and sketchy lines make his work on American Vampire the best fit for a book that was once set in the wild west.  You can see the art get cleaner as time goes by in the issues, almost as if he’s changing his style to go along with the changing times in the issues.

American Vampire is one of those books that I always put at the bottom of my stack.  I save the best for last.  If you’re a fan of Blade, The Lost Boys, Near Dark or any other vampire movie or book then you should be reading American Vampire. Don’t worry guys, there not a sparkling vampire to be seen in this book.