Well, the Cardinals appeared to have turned the page on the season with the return of Jon Jay and Matt Carpenter, winning five straight before dropping the final game in Miami. Unfortunately, the problems which have plagued the Cardinals all season (inconsistent hitting, a decimated bullpen) have reared their head in recent days, and the Birds have dropped the first two against Pittsburgh, dropping back to 3.5 games behind the Reds and 2.5 games behind the Bucs. 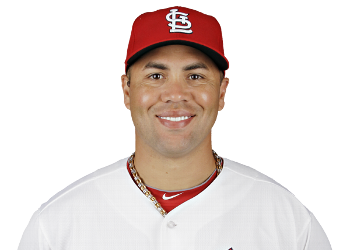 Carlos Beltran, one of four Cardinals selected to the All-Star game.

Yes, he made the list last week, but he’s still been the team’s most consistent hitter. He has an eight-game hitting streak going, batting .333 (11 for 33) and slugging .515 with 12 home runs during the streak. Beltran’s remarkable season has not gone unnoticed (more on this later), and he’s been the team’s most consistent offensive presence this season, leading the National League in RBI and trailing Ryan Braun for the lead in home runs by two.

I already talked about him last week. I’ll just show you his lines for the month of June:

Is there any Cardinals that’s less appreciated for his efforts than Lohse? Well, actually…

Westy’s struggled with his consistency this season, which resulted in a pretty poor May and first half of June. His last three starts have been extremely encouraging, though:

Since his dominating start against the White Sox, Lynn has taken a sharp nosedive.

In his past three starts:

Lynn’s overall body of work this season’s been extremely impressive, but he’s elevated his pitches in recent starts and as a result has yielded a lot more base hits and fly balls.

Other than Beltran and Holliday, the rest of the team’s struggled to produce consistently the last week or so.

Allen Craig’s driven in four runs in five games, but three of those came in one game.

Perhaps wearing down a bit, Rafael Furcal’s gone just 2 for 15 this week.

Yadier Molina did have a solid series against Miami, hitting two bombs and driving in five, but has gone 0 for 5 against the Pirates. Combined with the Miami series, he’s gone 3 for 15 since the end of the Royals series.

I don’t think I can really type much on here without crying.

Fernando Salas has given up six earned runs in his last four appearances spanning 2.2 innings.

Eduardo Sanchez has given up four earned runs in his last two appearances spanning 1+ inning. He was demoted to Memphis along with Sam Freeman.

Until Friday, Marc Rzeczynski had actually gone four consecutive appearances without surrendering an earned run, but that number’s a bit misleading, as those four appearances spanned just 1.2 innings, and in one appearance he faced one batter and surrendered a hit before he was pulled.

The Cardinals will likely be buyers in July with one month left until the trade deadline. They could either make a strong play for an established reliever or go after a starter to take the spot of one current starter (as strong as Lynn’s been pitching, his innings will be monitored and likely limited this season). They did make a corresponding move this week, calling up Maikel Cleto and Barret Browning to take the spots of Freeman and Sanchez in the bullpen.

The Cardinals have the chance to gain some ground this week. In the midst of a lost season, Colorado (30-47) comes to town for a four game series before Miami visits Busch for the first time this season. After that, the team will have some time to mend their wounds and rest up during the All-Star break.

The All-Star rosters were announced today (with the exception of one spot), and four Cardinals earned honors.

Rafael Furcal will start an ASG for the first time as the NL’s starting shortstop. This will be his third ASG.

Carlos Beltran is one of three starting outfielders. This is his seventh All-Star game.

Yadier Molina made the team as a reserve catcher. He will be at his fourth consecutive All-Star game.

Lance Lynn was selected to his first ASG in his first full season at the major league level.

There’s still one open spot left on the NL roster for fans to decide. David Freese is one of the finalists.

While I understand the desire to get the fans into the experience, I’m adamantly opposed to the idea of them voting in the starter as long as home field advantage is decided by the winner. Some fans are upset that Freese and Molina aren’t starting at their respective positions, but I’m not. My nitpick comes with the players chosen ahead of them. Buster Posey and Pablo Sandoval are having solid seasons, but there’s no logical reason they should be starting ahead of Carlos Ruiz and David Wright, respectively. If any Cardinal got snubbed, it was Matt Holliday. Regardless, having four (possibly five) players on the roster is a tremendous accomplishment, and I congratulate those who were chosen.