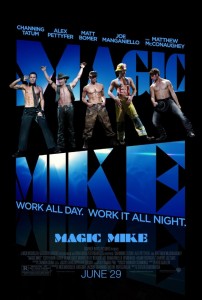 Let me be honest and say that I was not looking forward to seeing Magic Mike. I was not a huge fan of Channing Tatum, especially his acting. And needless to say, I wasn’t the least bit excited to see a movie that revolves around him stripping. But as a fan of film and a movie critic, I try to always keep an open mind – and give even the least likely of films to impress me a chance. And I hate to say it, but I actually really liked Magic Mike.

Mike (Channing Tatum) is not your average entrepreneur. He wears many hats, and also takes many of them off. By day he is a construction worker, runs a mobile detailing business, does accounting – and tries to find as many other ways as possible to open up his own custom furniture business. But by night, he becomes “Magic Mike” – a stripper at an all-male revue called Xquisite. Ran by Dallas (Matthew McConaughey), Mike and his fellow lightly-clothed friends – Ken (Matt Bomer), Big Dick Richie (Joe Manganiello’s), Tito (Adam Rodriguez) and Tarzan (Kevin Nash) – fulfill every woman’s fantasy for a couple of hours before they have to return to their boring lives. When Mike meets 19-year-old Adam (Alex Pettyfer), he decides that “the kid” might be just what the show needs. Adam is introduced to a whole new world, while Mike is introduced to his sister Brooke (Cody Horn) who he finds intriguing. As Adam digs deeper and deeper into his new lifestyle, Mike questions whether or not he can continue to be a part of it for much longer.

Going into Magic Mike, I thought it was going to be just another ladies night out type of movie. I didn’t think that it was anything other than a chance for Warner Brothers to cash in on the sex appeal of Channing Tatum, and women’s completely mind-boggling infatuation with the actor. But then again, with Steven Soderbergh in the director’s chair, I should have known better. Magic Mike is not a movie about male strippers. Well, it is, but what I mean is that it isn’t 2 hours of late-night “Skinamax” with no plot and terrible acting. The story revolves around strippers, but it about much more. The film is about a struggling business man, relationships, people – and how people change. You think you know who your friends are, but sometimes you don’t. And life is hard. These are just some of the lessons we learn in Magic Mike. 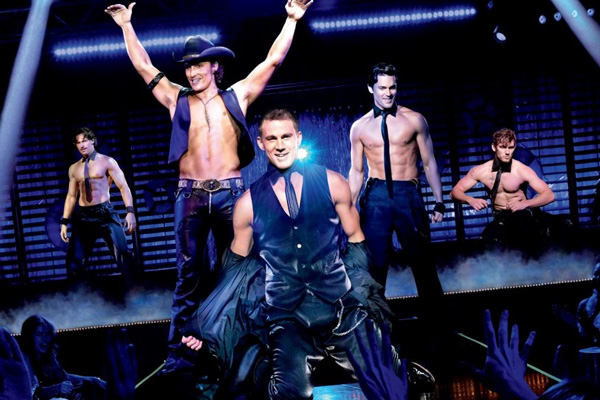 Having just recently watched 21 Jump Street, I thought Channing Tatum had found his niche. The film was a great buddy comedy, and the actor had a chance to let loose and never take himself seriously. It was one of his more likable roles in my opinion. But just when I thought I had Tatum figured out, he goes and gives his best performance to date – and does a really good job acting. Could it be that all he needed was the right script, or perhaps the direction of one Stephen Soderbergh? Or perhaps with experience he has become a better actor. Whatever the case, Channing Tatum is likable, charismatic and steals the show in Magic Mike. Needless to say he fits the part of male stripper, having actually been one before Hollywood. But Tatum also plays the role of a lost youth, trying to find his way in a crazy world to a T.

Aside from seeing completely far too much of them, in my personal opinion, all of the male strippers did a great job in the film. Matthew “alright, alright, alright, alright, alright” McConaughey does a fantastic job as the sleezy, not-sure-if-he-is-a-good-guy-or-a-bad-guy stripper turned manager of Xquisite. Best known as Alcide in True Blood, Joe Manganiello has many memorable parts (pun intended) as Big Dick Richie. And fellows, you haven’t completely been forgotten. Nerds everywhere will rejoice after seeing former Attack of the Show host Olivia Munn topless. Munn is more than just eye-candy though, and does well as Joanna – Mike’s on-and-off again fling. I actually thought she would have been a better choice than Warner Brother President’s daughter Cody Horn to play the lead female role, as I found Horn a bit monotone and boring. But overall, both ladies had good chemistry with Tatum.

I never thought that I would enjoy Magic Mike as much as I did. It’s not that I didn’t want to, but I just didn’t think there was a chance that it would be possible. But I have to give it up to Soderbergh and Tatum, and I must say that it is a very well done film. The movie visually looks fantastic, and the story and characters are interesting and well written. The entire cast does a great job, and I loved the gritty, realistic feel of the movie. All of the male stripper scenes are well choreographed and polished, and afterward return to the real world in a way that is believable. My advice would be to give Magic Mike a chance, even if it’s hard to do. As for the ladies – I have no doubt that there is plenty to enjoy, even if the sound breaks down in the theater.

Magic Mike is an B+