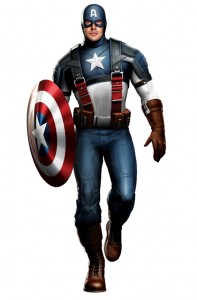 Out of all the superhero films coming out next summer, Captain America is the one I am looking forward to the most.  That may change once I actually see a trailer for the film, but I really like Chris Evans and that the film will be set in WWII.  Wizard Magazine recently got a chance to sit down with star Chris Evans to talk about playing the iconic character.

Comic book fans are particularly protective of Captain America. He is after all supposed to be the physical and moral pinnacle of humanity. Does that shield feel heavy under all that pressure?

“As far as the physicality goes, that comes from the serum, and I think special effects will help me carry the load. As far as who he is as a man, the reason he’s chosen for this experiment is because he has a pure heart. It’s the morality, the nobility. He’s a real redeeming character to play, it’s exciting to think of playing him. I actually have a friend of mine who I’m modeling the character after. This guy is actually an Eagle Scout, he’s one of those guys who stayed in the Boy Scouts all the way until he was 18. He’s just a good human being. He does the right things, he’s open, he’s honest, he’s sincere, he’s selfless. It’s something that I think everyone aspires to. A lot of time I play characters who don’t have any redeeming quality [Laughing].”

But when the casting was announced, there was positive and negative reaction. Did you keep an eye on the comments?

“I can understand if fans are wondering. That’s okay. I’m obviously taking their concerns to consideration, but I can’t get too swept into it, otherwise I’ll start beating myself up and losing my confidence.”

Besides Captain America, you also played the Human Torch in “Fantastic Four,” and “The Losers” is also based on a comic; have you had any close encounters with rabid fans?


“It’s great so far, They’re so enthusiastic. They want the product [to be] as good as you want the project to be. These guys live and die for it. It reminds you why you make these movies. These people want it to be good so desperately, that you so desperately want to give them what they’re looking for…”

Well, he didn’t exactly say anything groundbreaking.  But for fans, anything about the film they will get excited about.  He was my favorite part in the Fantastic Four films, and I actually just watched The Losers this weekend and really enjoyed it.  I am really hoping this will be good.

What do you think?  Is he the right man for the job?  Let us know in the comments below.