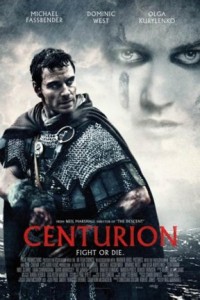 I have to admit the first thing I looked at was the description of the trailer, and I laughed at the name Imogen Poots. Sometimes, I feel I was cursed with a weird last name, but then people like this come along and make me feel much better about my own surname. Although, Imogen Poots is extremely beautiful, and is appearing in this film as well as, Solitary Man, and a few other projects. So, I’m sure she is laughing all the way to bank.

The trailer looks like a hybrid of Gladiator and 300, which means that it will probably do great business with the male audience. Dominic West and Michael Fassbender will continue to solidify their status in gory action films, and hopefully make a jump to bigger projects. (Something I’d been hoping West would do for a while.) Regardless, it is another project that holds some interest for me, and in a summer that has been a bit lame that is something to look forward to.

AD 117. The Roman Empire stretches from Egypt to Spain, and East as far as the Black Sea. But in northern Britain, the relentless onslaught of conquest has ground to a halt in face of the guerrilla tactics of an elusive enemy: the savage and terrifying tribes known as the Picts. Quintus, sole survivor of a Pictish raid on a Roman frontier fort, marches north with General Virilus’ legendary Ninth Legion, under orders to wipe the Picts from the face of the earth and destroy their leader Gorlacon. But when the legion is ambushed on unfamiliar ground, and Virilus taken captive, Quintus faces a desperate struggle to keep his small platoon alive behind enemy lines, evading remorseless Pict pursuers over harsh terrain, as the band of soldiers race to rescue their General, and to reach the safety of the Roman frontier.