Harry Potter Cast Reacts As Filming Ends on the Series 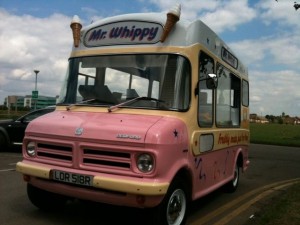 Daniel Radcliffe, who started the series at age 11, said, “Everyone was really devastated. It was really, really sad. Were crying quite a lot.” When asked about how he felt about finally ending the role he said, “It’s a weird, weird feeling.”

Co-star Rupert Grint had a great way of dealing with the tension. The famous red haired actor who played Harry Potter’s best friend Ron Weasley, brought his private ice cream truck, and gave away ice cream to cast and crew.

Warwick David, who played both the goblin Griphook and Professor Flitwick, tweeted:

For the last day on ‘HP’, Rupert ‘Mr Whippy’ Grint arrived in his ice cream van & served up 99s for cast & crew. It brought a smile to everyones face on what was a very emotional day. It was a thrill to see a teaser for ‘Deathly Hallows’ too. 🙂

Most likely Warwick is referring in that last bit to a new teaser trailer which should be premiering soon. (I imagine it will be shown before Christopher Nolan’s Inception.)

What do you think about this? Are you sad to see the end of an era? Let us know in the comments.