Last year, for the first time in franchise history, the team had five players slug 20 or more home runs, a remarkable feat given some of the high-powered offenses of years past (the 1931 team holds the NL record for runs scored in a single season with 1,004). 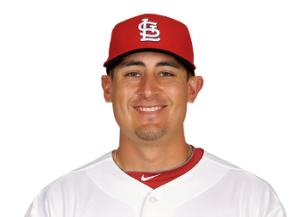 Signed to a five-year deal this off-season, Craig will be expected to anchor a lineup that ranked second in the NL in runs last season.

Matt Carpenter is making the transition to second base, but with David Freese on the disabled list to start the season, he’ll shift over to third, where he’s played in previous years. This allows the light-hitting supersub Daniel Descalso the opportunity to start at second base. Allen Craig had the highest average in the majors with runners in scoring position (minimum 100 plate appearances), but he missed the first month of the season with a knee injury and has yet to play a full season in the majors. He signed a five-year deal in the off-season, though, so the team is taking a gamble he can stay healthy; if so, his potential is tremendous.

Freese played his first full season in the majors last year, and he had a solid season, although he tapered off in the second half. His placement on the disabled list is retroactive to March 22, so it’s possible he could be back after a week. Kozma had an incredible September filling in for an injured Rafael Furcal, and he came up with a huge hit in the NLDS against Washington. His career stats in the minors aren’t exactly beacons of hope, but he’s adjusted his swing and right now he’s as confident as ever. If he can hit .260 and play above average defense, I think Cardinal nation will be happy.

Matt Holliday had another typical season, while Beltran had an incredible first half (.296/.382/.542, 20 HR, 65 RBI) before he wore down. Meanwhile, Jay managed to avoid the late season woes he suffered the previous two seasons (although this could be due to the fact that he missed a month in the first half) and provided above-average defense, making some highlight-reel catches.

Meanwhile, Molina took another step forward offensively and posted the best overall season of his career. He finished fourth in MVP voting but earned his fifth consecutive Gold Glove. After throwing out just 29% of baserunners in 2011, he rebounded last year, throwing out 48% of baserunners who tried to take a base on him. It’s unlikely he’ll be as productive at the plate this year, but he’s still the best defensive catcher in baseball, and if he can hit .280 and drive in 60, he’ll remain one of the team’s strengths.