Easter is almost upon us so I wanted to do a list that fit the season. A list of movies about Jesus seemed like it would either be boring or get me in a lot of trouble. And since I enjoy neither of those things I figured I would find a slightly less controversial topic this week. 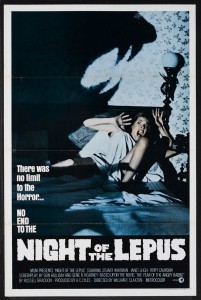 Creatures that are “non-threatening” or even “cute” when alone can suddenly become terrifying when presented in large groups. We see this play out when watching things like The Birds or Willard or the Democratic National Convention. Night of the Lepus tries to dress-up their monsters by using an arcane word with Latin roots to disguise one very non-scary fact…bunny-rabbits have gone kill-crazy.

Making matters worse (and by “worse” I mean “hysterically funny”) is the fact that no effort was taken to make the rabbits in question look frightening. They aren’t contorted grotesqueries with long fangs red with the blood of their victims. No, instead we get regular ol’ rabbits filmed against miniature backgrounds or people in rabbit costumes. Some of the attacks look less like violence and more like “furry porn”. But it’s an absolutely, unintentional laugh riot. Surely the only thing preventing it from being featured on an episode of Mystery Science Theater 3000 is the fact that it was produced by MGM and, presumably, too expensive to license.

It’s tough to say whether The Brown Bunny is best known for being absolutely atrocious or for featuring the most graphic depiction of oral sex ever seen in a non-pornographic picture. Either way, the film is best remembered for “sucking”. Roger Ebert’s review of the film was so scathing that writer/director/star Vincent Gallo famously wished cancer on him…which Ebert then promptly got.

Eventually Gallo would cut 26-minutes from the film and receive a moderately positive review from Ebert. The opening scene is a 7-minute, continuous take of a motorcycle race. And that’s 4-minutes shorter than the original version. To give you some idea of how laborious the original cut was, 8 ½ of those 26-minutes comes from one continuous, largely wordless, driving scene. And by “continuous” I mean “they mounted a camera to the hood of the car and let it roll”. Seriously, the film could have just as easily been called Google Maps: Street View! The driving scene now clocks in at least 10-minutes…I think. I’ve never made it all the way through.

I did, however, make it through the blow-job scene.

Oh, it’s called The Brown Bunny because one of the characters mentions in passing that she had a bunny when she was a kid. It’s probably a metaphor or some shit like that.

Ok, here’s an actual good movie. If you don’t like Harvey then you probably don’t have a soul. Jimmy Stewart plays Elwood P. Dowd, a man whose best friend is a six foot tall (6’ 3.5” to be exact) invisible rabbit. Elwood might be an alcoholic. Or he might be crazy. Or even both. But, as played by Stewart, he’s so sweet and likable that you really don’t care. You just want to hang out with him and his rabbit.

Quite possibly the funniest movie ever made. And it’s hard to believe that the group hadn’t seen Night of the Lepus after watching their famous “killer bunny” scene.

Maybe you’re tired of ham for Easter. Perhaps you’d like some rabbit stew. The film that convinced men to stop cheating on their wives (that’s completely stopped, right?) is a wonderful treat for your Easter basket. And it will teach the children a wonderful lesson about fidelity.

What’s that? One dead rabbit isn’t enough for you? No problem. Here’s a movie full of rabbits slaughtering each other. Guaranteed to either turn your child into a weeping mess or a serial killer. Either way, your home will be rabbit free. Well, except for that last rabbit standing. But he’s earned it.