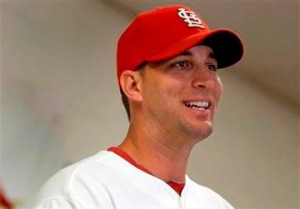 With the recent announcement of Adam Wainwright’s contract extension, the Cardinals have now locked up their longest-tenured pitcher until 2018, when Waino will be approaching the twilight of his career. For two years, Wainwright was one of the top starters in baseball, but he missed the entire 2011 season and spent much of 2012 trying to re-discover his groove. Should he be able to re-discover his 2009-10 form, he’ll provide a solid anchor.

Garcia…well, let’s just say I’m not entirely sold on Garcia’s shoulder. He had an excellent spring training, but choosing the rehab route is always a risky maneuver (hello, Rafael Furcal). Now, he chose this acting upon doctors’ advice, but it’ll be interesting to see if he can live up to the contract extension he signed with the team a couple seasons ago.

Lance Lynn was one of the top starters in the National League the first half of last season (even garnering an All-Star appearance for it) before he wore down.  He reported to camp 20lb. lighter in an effort to prevent similar wear and tear this summer.

Jake Westbrook was, well, Jake Westbrook. I have to admit, I was a little surprised they picked up his option and extended him another year, but as a number five, he’s actually been a solid starter. It’ll be interesting to see whether they pick up his 2014 option given the influx of young arms waiting in the wings…

…one of which took the last spot in the rotation, Shelby Miller. The Cardinals’ top pick in the 2009 draft, Miller came to camp last year underweight and struggled as a result. By the end of the year, though, he righted himself and earned a promotion to the big leagues when the rosters expanded. In his lone start last season, he took a no-hitter into the sixth inning, earning a spot on the post-season roster. 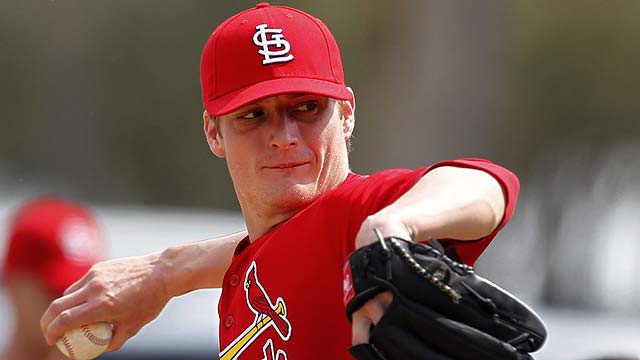 With last year’s ace Kyle Lohse heading north to Milwaukee and Chris Carpenter out for the season (likely for good), this rotation is now Wainwright’s to lead. The depth of the rotation is one of the team’s biggest assets; the 1-2 combination of Wainwright and Garcia may pale in comparison to other aces, but Wainwright, Lynn, and Westbrook combined for 45 wins last season, and Garcia had two consecutive 13-win seasons before last year. Should someone get injured, the team has Joe Kelly and Trevor Rosenthal waiting in the bullpen, with even more prospects waiting in the minors (hello, Michael Wacha [Wacha Wacha]). For the first time I can ever recall, this team has incredible depth on the mound. 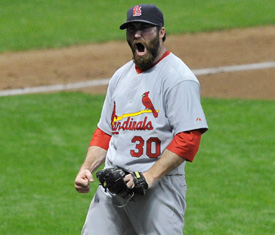 With Jason Motte starting the season on the DL (shoulder injury), Boggs will likely get the opportunity to close games while Motte is on the mend. The Cardinals, reticent to keep Rzepczynski as the team’s lone LOOGY after his struggles, signed Randy Choate to a three-year deal to provide another left-handed arm. Edward Mujica, acquired from the Marlins for minor leaguer Zack Cox, provided a tremendous jolt to the bullpen in the second half last year.

Kelly will be the team’s long reliever and is likely to get the first opportunity to start should one of the team’s starters go down with injury. It’ll be interesting to see how the wear and tear of another season affects his arm. A closer in college, Kelly jumped in innings pitched each year from 30.1 to 103.1 to 132 to nearly 180 last year. The debate is ongoing whether such a jump in innings for a young pitcher can have a deleterious effect on his arm (a hypothesis known as the Verducci Effect), but it can’t be denied that Kelly’s been forced to make a tremendous jump in exertion the last three seasons.

Of course, the most exciting arm everyone was abuzz about last year belongs to Rosenthal, who hits 97 on the radar gun regularly and has topped 100 on occasion. Rosenthal was in the competition to take the final starting spot but was the first to be marked for the bullpen this spring. After the team struggled for years with a mediocre bullpen, when Motte returns, it’ll be interesting to see the team with four arms that can hit mid- to upper-90’s with their fastballs (Motte, Boggs, Kelly, Rosenthal). Hopefully Motte’s return won’t be delayed too long; he had the tendency to give up home runs, but he was also effective as the closer (tied Craig Kimbrel last year for the league lead in saves with 42).