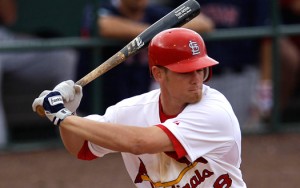 Jackson’s long been regarded as the Cardinals’ best shortstop prospect, even usurping Kozma at Memphis last year, but after Pete’s strong performance last fall, he’s taken the job from Jackson, and it’s likely Greg Garcia has even leapfrogged Jackson on the organizational depth chart. With Freese out, though, Jackson will make the opening day roster, providing depth at second, third and short, as Garcia has yet to play a game above AA. Adams has raked at every level in the minor leagues, posting a career OPS of .930; unfortunately for his future with the Cardinals, he’s pretty much limited to playing first and DHing. He could perhaps get a few more at bats this year if Craig plays in right or left to spell Holliday, but it’s likely if he’s to have a future as a starter, it will be elsewhere barring unforeseen developments.

Tony Cruz had a decent if unspectacular 2012 as Molina’s backup. He’s nothing more than a JAG (just another guy) in terms of statistics, but he can spot start and pinch hit. Wigginton was a puzzling signing. Ostensibly, he was signed for depth and to provide some pop off the bench, but I’m still not sure why the Cardinals signed him for two years. He was an All-Star in 2010, and he’s hit 22 or more home runs four times, but $5 million is a lot for a bench player.

Allen Craig has a full healthy season and earns a spot in the All-Star game, eventually hitting .300 and driving in 100 runs. Yadier Molina hits .300 and throws out 45% of base-runners. Pete Kozma miraculously hits .280 and provides tremendous defense. Matt Carpenter becomes the anti-Skip and plays solid defense at second while managing to hit .290. All of the starters stay healthy and win at least a dozen games. Wainwright and Lynn each win 18. Trevor Rosenthal becomes the Cardinals’ version of Aroldis Chapman, striking out 100 batters in 50 innings. If everything goes right, this team has a legitimate chance of reaching its third NLCS in a row, perhaps beyond as long as they don’t face Barry (*@#ing Zito.

Yeah, maybe we shouldn’t go there. 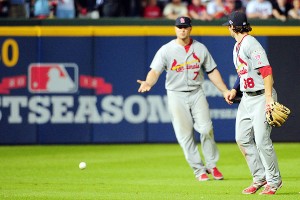 We don’t know either, Matt.

It All Boils Down to…

Health. If healthy, this team has the talent to win 100. As it is, with the starting third baseman and the closer beginning the season on the disabled list, the starting right fielder dealing with a toe issue, the projected starting shortstop missing the entire season with an exploded elbow, the number two pitcher dealing with a tear in his shoulder, this team is limping along as it is and it’s still early enough in the year that even the Cubs are in contention (officially). Assuming reasonable health, the biggest variable will be the play of the middle infield, as the rest of the lineup and pitching (save Miller) are established quantities.