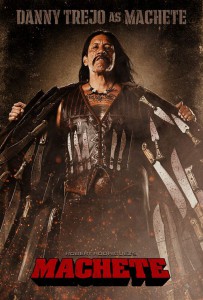 The movie “Grindhouse” had a mock trailer of “Machete”, and Rodriguez decided to expand on this mock trailer plus the character Machete was also in Rodriguez kid flicks spy kids 1,2, and 3. The Movie “Machete” Driected by Robert Rodriguez and Ethan Maniquis, written by Rodriguez and his cousin Alvaro Rodriguez is one of the most insane movies I have ever seen. The action is insane, killing is insane, nudity is insane, all around insane.

The story begins in Mexico, where Machete(Danny Trejo) are at war with Torrez(Steven Segal), drug kingpin played. Insane circumstances lead him to flee to Texas, and by “Insane,” I mean a scene involving so many beheadings in five minutes that “Kill Bill” would find it distasteful.

Fast Forward three years later Machete who has been working as a day laborer in the U.S. receives an offer from a man named Booth (Jeff Fahey): He’ll pay Machete $150,000 to assassinate McLaughlin (Robert De Niro), a state senator whose campaign commercials refer to immigrants as an “infestation” of “parasites.” He even is in a video with vigilantes taking border control into their own hands. The vigilantes are led by Von(Don Johnson) and are gearing up for a war against Luz(Michelle Rodriguez) who uses the truck she sells tacos out of as a base of operations to connect undocumented workers.

Machete and Luz do meet each other before he accepts the Job. All along they are both being watched by watched by Sartana (Jessica Alba), a conflicted Immigrations and Customs Enforcement agent. Sartana doesn’t know if she should help Machete or take him and Luz in. (There is also for you men a great shower scene with Sartana).

The characters in “Machete” are Insane as well. I have only introduced you to a couple of the main players. We also have Machetes brother a Padre(cheech marin) who we also saw in “Grindhouse”, is a gun wielding Padre, April (Lindsay Lohan) daughter of Booth who has a drug, sex addiction, end up in a nun outfit, you have nurses that carry weapons. The cast of characters is as insane as the movie itself.

Yes the story is silly, bloody, most could not happen, but it was really well done. Rodriguez filmed the movie and gave it a gritty look, makes you think you are watching an old 70’s slasher flick. The story is not that great but you will laugh and be grossed out all at the same time. I would grade this movie an A, all men you will enjoy it, and if your wife/ girlfriend doesn’t want to go, remind her of all the chick flicks you have watched with her. This is a great way to start Fall movie season can’t wait to see what is next.