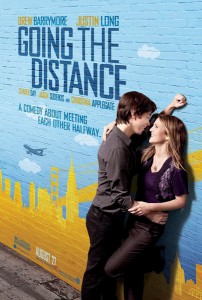 Former couple Drew Barrymore and Justin Long reunite on screen in the new romantic-comedy Going the Distance. Barrymore stars as Erin, a woman getting a late start on a career in journalism whereas Long plays Garrett, who is trying to carve out a place for himself in the record industry. The two are both adamant about keeping their fledgling relationship casual since, while both currently live in New York, Erin will be returning to San Francisco once her newspaper internship is over. (Drew Barrymore as an intern? Hey, I told you it was a late start.) The film quickly establishes the two as a strong couple with deep affection for each other struggling with difficulties of a long-distance relationship. It’s a nice change of pace from your standard rom-coms, smartly trading the “will they/won’t they” paradigm for a “how will they” one.

The first half-hour gently tweaks familiar genre tropes as Barrymore and Long give us a “meet-cute,” a falling-in-love montage and even the last minute dash to the airport to proclaim love. The difference is this movie keeps going long past the point that most films stop…which is both to its advantage and to its detriment. Most romantic-comedies deal with the heady rush of new love, when the protagonists are hopped up on endorphins and pheromones and things are fresh and exciting. Erin and Garrett’s relationship is strained as they begin to spend as much times in airports as they do with each other. The obstacles they face in the film aren’t mere constructs of a screenwriter, but actual hurdles that people in similar situations would face. It’s refreshing to see a film focus on maintaining a relationship rather than starting one. Presumably (since they agreed to this film after their split) Barrymore and Long parted amicably and they have a comfortable chemistry together. The two characters (and actors) have a genuine affection for each other.

Now thus far, the film probably sounds like a charming film from a bygone era. However this is the age of Apatow and, while the story is sweet and simple, screenwriter Geoff LaTulippe dresses up the proceedings with foulmouthed dialog (much of it quite funny). Charlie Day and Jason Sudeikis, as Garrett’s roommate and coworker respectively, steal every scene they are in. Even Barrymore gets in on the act with a casual sort of vulgarity that is probably closer to her actual personality than anything we’ve ever seen on screen before. And she delivers some of the film’s funniest lines. It’s not so much that these scenes don’t work as that, at times, it feels as if you’re watching two separate films grafted on to each other. But even in its zanier moments, director Nanette Burstein keeps the film largely grounded in reality most likely due to her background helming documentaries such as The Kid Stays in the Picture and [American Teen].

The film starts off briskly paced but gets bogged down in its second half. Clocking in at 103 minutes, the film feels 20 minutes longer. As the characters vacillate between their careers and their relationship, the film comes grinding to a halt. However, the film is funny (though raunchier than the trailer would have you believe) and Barrymore and Long are immensely likable. Even as exes they have infinitely more chemistry than anyone Hollywood has teamed up with Katherine Heigl or Jennifer Aniston.