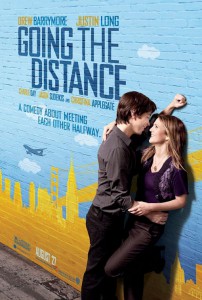 This year has not been good to romantic comedies, we have been subjected to the bottom of the barrel with films like When in Rome and Leap Year. So, when I ventured out to see Going the Distance,  my hopes weren’t the highest, but the film boasted a largely talented cast, and I never pass up a chance to see any movie. What I saw actually surprised me, and resulted in the best romantic comedy I’ve seen this year.

Going the Distance stars real life couple Drew Barrymore and Justin Long, as two people, Erin and Garrett, who find love when they aren’t looking. To complicate matters, Erin is moving back to the west coast, and leaving Garrett stranded in New York.  Despite the deceleration at the beginning of the relationship saying they weren’t looking for anything serious, the couple decides they have a once in a lifetime thing.  Upon this discovery it is decided that they should try a long distance relationship. Using the normal romantic comedy formula, you can pretty much guess what happens from here on out.

What makes Going the Distance work compared to similar comedies is not a superior plot, but superior acting and chemistry between actors. Long and Barrymore have an effortless chemistry that most likely comes from their quite real off screen romance.  Although, what really puts the film over the top is its excellent supporting cast. Charlie Day, who most know as Charlie from It’s Always Sunny in Philadelphia, is the scene stealer of the film playing Garrett’s slightly uncouth roommate, Dan. Every scene he appeared in brought hearty guffaws from the crowd. I will be surprised if the strength of his comedic timing in this film doesn’t lead to more roles.

Jason Sudekis plays Garrett’s mustachioed friend, Box, who despite looking a bit creepy is given a certain amount of charm by Sudekis. Playing Erin’s sister and brother-in-law are odd couple Christina Appelgate and Jim Gaffigan, who despite looking like polar opposites make quite a charming couple. One of the funniest scenes in the film involves Gaffigan’s late night snacking habits and a late night romp between lovers. There is even a couple blink and you’ll miss them cameos from comedians like Mike Birbiglia and Rob Riggle. There is no doubting that this film is not lacking on talent.

It is ultimately this cast that sells what might have been lame gags in another cast’s hands. The late night table scene I mentioned earlier could have been corny and disastrous if not played right, and that is what  makes this a solid romantic comedy. I can’t say there weren’t moments when I felt like things didn’t click, but the film swiftly picked up the pace with another joke or gag that made me forget my earlier misgivings.

If your looking for a solid date night movie where both sexes will find plenty to laugh about, and a film that despite formula contains plenty of laughs and lots of charm, then Going the Distance is the film for you.