‘The Book of Mormon’ Offers Up Big Laughs at the Fox Theatre in St. Louis (Review)

After quickly becoming one of the most sought after Broadway shows to see, The Book of Mormon is finally going “door to door,” so-to-speak. In 2011 the brilliantly satirical musical, written by South Park creators Trey Parker and Matt Stone along with Robert Lopez (co-creator of Avenue Q), won 9 Tony Awards including best musical. It also broke the record for top ticket price, commanding $487.25 for a prime orchestra seat (purchased within 48 hours of the performance). So why is the hilarious, and often times offensive, comedy so great? Aside from the fantastic performances and catchy music, The Book of Mormon does exactly what creators Parker and Stone are best known for – never pulling any of their punches.

Find out how to get $25 tickets to see The Book of Mormon in St. Louis before each performance. 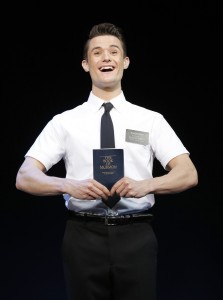 In case you haven’t figured it out yet, the subject of the musical is the Book of Mormon – or more specifically, the young Mormon missionaries who are sent to various locations around the world to spread its word. Elder Price (Mark Evans) has everything going for him, and can’t wait to start his mission. As missionaries are always teamed up in pairs, he hopes that he and another capable young Mormon will be sent to his dream location of Florida. But not unlike being picked last in kickball, the list of possible teammates is whittled down until he is matched with Elder Cunningham (Christopher John O’Neill) – who is a bit of an oddball, and probably the polar opposite of Price. And to add insult to injury, the two of them are sent to work in Uganda. Not only do they struggle to get along in a place where no locals have been converted by the missionaries before them, but they also have to deal with the war and fighting that is taking place around them.

Right from the start, if you are a fan of South Park you will certainly recognize the tone that sets the scene. In the beginning of both acts, a brief history of the Mormon religion and The Book is given, no doubt narrated by Stone and Parker. And in South Park fashion, no-one is safe – as they depict Jesus, Moses, and Joseph Smith. If you are easily offended, the show isn’t for you. But to be perfectly honest, the humor in the show is handled as tastefully as possible and never gets too bad. There was quite a diverse audience on opening night at the Fabulous Fox Theatre, and never did I see or hear anyone walk out in the middle of a performance.

We are introduced to the missionaries and their Book in the opening song “Hello!” This fun and up-beat song sets the tone of the show, and is sure to put a smile on your face. As they ring the doorbell, you hear what becomes the iconic “ding-dong” when they go door to door. If you have ever been visited by a team of Mormon missionaries, you know that they are some of the most friendly and courteous people you will ever meet. The way the actors play this up is fantastic, and “rings” so true to life. We can tell that Elder Price is always professional and by the book, but Elder Cunningham is a different story. “Hello, would you like to change religions? I have a free book written by Jesus,” he shouts at his innocent homeowner. This is just one of hundreds of laugh out loud funny lines throughout the show. O’Neill does a great job in the role, as the naive and ambitious young missionary. His chemistry with Mark Evans on stage is priceless, as their two characters couldn’t be more different. Watching them work together makes for a great show, and the casting is spot on. 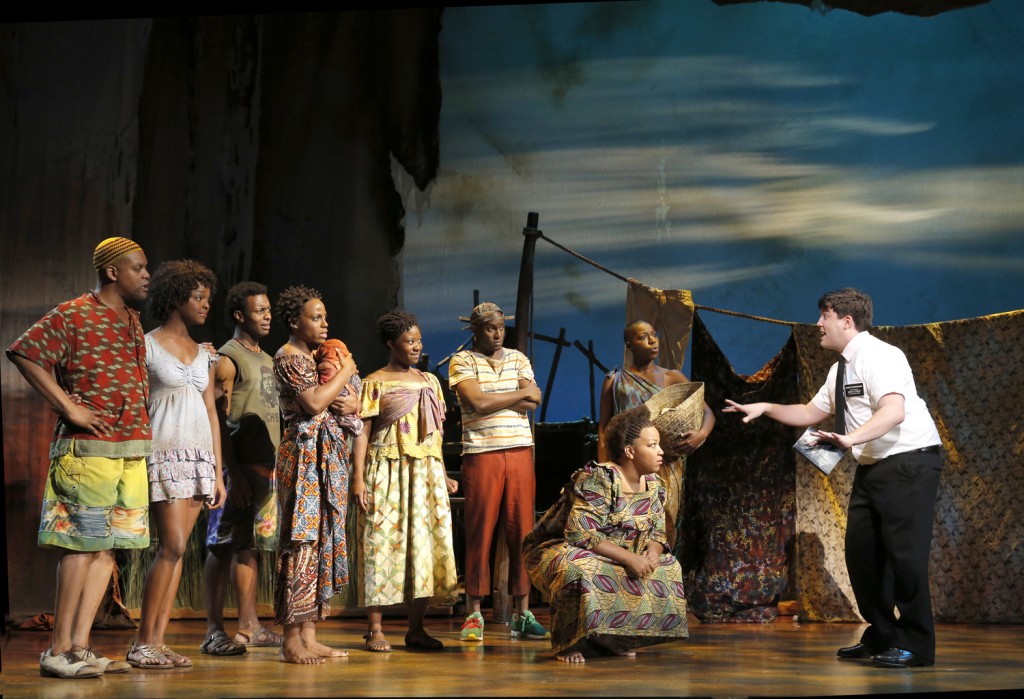 When the Elders are transferred to Uganda, the stage is transformed into a small village where poverty, AIDS, and violence run rampant. You really feel for the characters who seem completely out of place, but somehow stay optimistic. They try to convince the locals to turn to the Book of Mormon to help them with their problems to little avail, until they meet Nabulungi (Samantha Marie Ware). She helps convince her people and father, who is the head of the tribe, to listen to the Elders. It is hard not to laugh as Elder Cunningham mangles the pronunciation of her name time after time. The two of them also make a dynamic team on-stage.

The missionaries are not alone on their trip; they are also joined by a group of elders who have failed thus far to convert the locals. They sing a great song when they first meet Elder Price and Cunningham called “Turn It Off,” where they teach them a “cool little Mormon trick” to turn their feelings off like a light switch. All of the elders do a fantastic job in their respective roles. 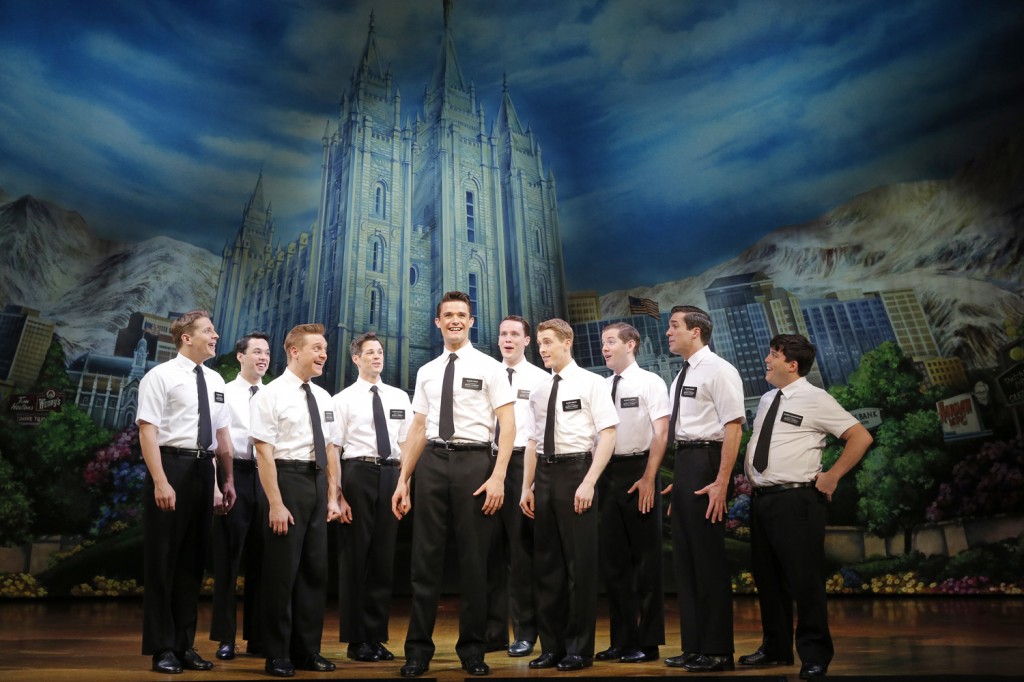 One thing that should be fairly obvious is that The Book of Mormon is probably not for two types of people: those who are easily offended (as mentioned previously) or probably not members of the Church of Jesus Christ of Latter Day Saints. Co-creator Trey Parker said in an NPR interview, “I don’t think anybody would want to see a two-hour-long Mormon-bashing, and we wouldn’t want to see that either,” and “we loved almost all the Mormons that we had ever met.” The show is satire, and never do the elders come off as unlikable or bad people. The show is incredibly entertaining, and a lot of fun. And if nothing else, raises awareness of the Book of Mormon. And for those who are not already fans of the satirical styling of Parker and Stone, give it a chance – you will probably find yourself rolling over laughing before the second act.