‘Cloudy With a Chance of Meatballs 2’ HD Trailer 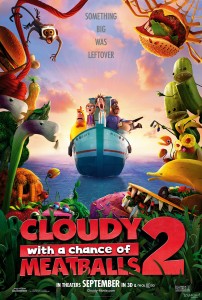 Flint Lockwood is back. If you saw the original film, Cloudy With a Chance of Meatballs, you’ll no doubt be ready for a return of the characters. This time we are heading back to see the world in which Flint has created with his machine, where the life has evolved into what appears to be highly sentient food. The first film was wacky, and this looks to be no exception. Let’s hope that the series can continue to be one enjoyable for both children and adults.

After the disastrous food storm in the first film caused by his machine, Flint Lockwood and his friends are forced to leave the town of Swallow Falls. Flint accepts the invitation from his idol Chester V to join The Live Corp Company, which has been tasked to clean the island, and where the best inventors in the world create technologies for the betterment of mankind. Upon arriving back at Swallow Falls, Flint discovers that his machine still operates and now creates mutant food beasts like living pickles, hungry tacodiles, shrimpanzees and apple pie-thons. It is up to Flint and his friends to put a stop to the machine once and for all before this new form of foody life breaks free from the island and invades the world.