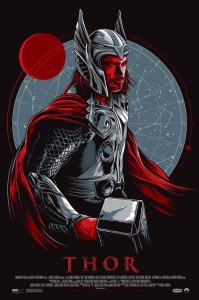 Thor is arguably in the running for the best Marvel movies yet and is a pretty much non-stop blast of action, fun, and humor from start to finish; lead by star making turns by Chris Hemsworth and Tom Hiddleston.

Thor is a god, and the future king of Asgard, that wields a powerful hammer that only elevates his abilities to being the greatest warrior in the Realm.  As Thor’s anointment ceremony is about to be carried out Asgard’s ancient enemies, the Frost Giants, attempt a sneak attack to recapture an ancient weapon that King Odin took from them a millennium ago.  Thor, Loki (Thor’s brother), The Warriors Three (Volstagg, Fandral and Hogun) and Sif head off to the Frost Giants home of Jotunheim to confront their leader Laufey, hoping to set the Frost King straight. After the inevitable battle on Jotunheim, Odin has to step in with Thor being banished in the aftermath of the battle.  On Earth, stripped of his powers and hammer, Thor finds himself wrapped up in the lives of a team of scientists who hesitantly help to find him to find his way again.

The film is directed by Kenneth Branagh and the results are wonderful.  The world building and design of Asgard is just fantastic and might be the best fantasy world created in a film since LOTR.  I wish the whole film had been set in Asgard, and that isn’t a knock on the earth storyline, it is just such an amazing and fascinating world that can’t be explored again soon enough.  The majority of the film takes place in the Gods realm and we only see the tip of the iceberg I feel.  The production design and visual effects all look top notch, perfectly bringing the world to life and allowing you to really buy into this world.  The drama and story is just as engaging on Asgard as it is visually and the family drama that unfolds works to great affect.

The story in Asgard is an epic family fantasy drama, but back on Earth the story is a duck out of water, coming of age story, with a dash of romance.  The romantic aspect of the film is the weakest bit of the film but it doesn’t fail by any means; it is just a bit old fashion.  What does work for the film on the Earth side is the humor and our hero’s redemption.  From Thor’s adjustment to human life and his coming to grips with the mistakes of his past there is a lot of good material for people to latch on to.  The film has a lot of geeky flourishes and wonders but I think anyone in the general populous can come in and enjoy this film quite whole heartedly.  The pair of action set pieces on Earth also works as well as anything in the God’s realm, even when they aren’t built around super powers.

The actors in the film all work wonderfully in their parts and it all starts with Chris Hemsworth as Thor.  Hemsworth nails the character on both Earth and his godly realm.  Charming, powerful and at times hilarious, Hemsworth does everything right creating an incredibly likable and fun hero.  Nearly matching him is Tom Hiddleston as Loki who is the second lead in the film.  Smart and mischievous, Loki is a complicated character that we don’t ever really know where he is coming from.  Hiddleston is great at playing out the characters conflict and we never know where he is going to be coming from.  The cast beyond the leads is vast and almost equally as great, especially those that get to play immortals of Asgard.  Thor’s buddies are all played with a lot of swagger by Jaimie Alexander, Ray Stevenson, Joshua Dallas and Tadanobu Asano.  The scientists on Earth are played by Natalie Portman, Kat Dennings and Stellan Skarsgard and the group’s chemistry works among each other and with Hemsworth.  Hemsworth and Portman’s romance is written a bit light, but they have enough chemistry to make it work.  Anthony Hopkins is quite powerful as Odin while also showing a soft side and Idris Elba makes you wish his character Heimdall would have had a bigger role.  Clark Gregg keeps his character of Coulson consistent across the previous marvel film’ and gets by far his most screen time yet.  I just wish we would have had more Jeremy Renner here and not have to wait for The Avengers for Hawkeye to get some real action.

In the end, Thor is blockbuster filmmaking at nearly it’s finest.  Great effects, epic story, an excellent and giant cast, and an affective post-converted 3D treatment, the film has next to nothing you can complain about.  Kenneth Branagh knocks Thor out of the park and outside a slight lull in the Earth story and a stronger romance I can’t find anything I would really change.  I can’t wait to see Thor again, looking at you Kevin, and I hope that the sequel, if made, takes deeper into the world of Asgard; it is a magical place.