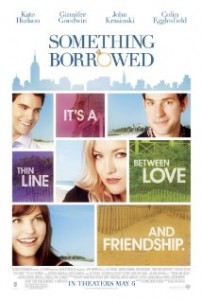 Let me break it to you softly. “Something Borrowed” doesn’t have a lot going for it. The acting is hammy, the story is manipulative and the whole thing is about twenty minutes longer than it should be. So than why was the overall experience enjoyable? Simple. The concept at the core of the movie is relatable…and the movies’ faults aren’t bad enough to keep us from realizing that.

“Something Borrowed” tells the story of Rachel’s (Ginnifer Goodwin from “Big Love”) struggle to reconcile her feelings about “the one that got away”. That object of her desire, Dex, played by Tom Cruise impersonator Colin Egglesfield may even have similar feelings. If only Dex wasn’t marrying Rachel’s best friend. It’s interesting to note that the structure here is different than it would be in most other romantic comedies today. Instead of Kate Hudson playing the pretty blonde lead, Kate Hudson’s character, Darcy is actually “the friend” to Ginnifer Goodwin’s character.

This is part of what keeps the movie from being just another crappy romantic comedy. “Something Borrowed” at least attempts to do some things differently. John Krasisnki, Ethan, plays a role that would typically go to a female. He is the emotional sounding board for the main character. Whenever Rachel needs to vent or discuss her thoughts, she turns to Ethan. “Something Borrowed” also takes some risks by building its story up to a point where one of the characters is bound to get hurt.

It has aspirations that are bigger than the typical romantic comedy, but unfortunately in the end reigns in those aspirations and allows its flaws to get the best of it. “Something Borrowed” might make for a decent date night if you have a gift card, but if not…there are better movies to see on the big screen.