Another Take By Zac: Film Review: The Rite 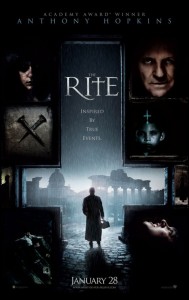 The Rite is being all wrapped up to be the next exorcism movie but is in fact a meditation on psychology vs. demonic possession that is moderately interesting before it makes the decisions for you.

The film is based on “real events” and follows a falling out of faith seminary student who is recruited to become a recruit of the new league of exorcists the Vatican is recruiting.  There has been a recent surge in possessions as of late around the world and the Vatican is wishing to place exercisers for easy access around the world.  The recruited student is Michael Kovak who is forced into priest hood by his father and when nearing graduation feels like he can’t go through with it.  The Vatican’s Exorcism Head Master takes a special interest in Michael and pairs him up with Father Lucas who attempts to show Michael the way.  Michael’s skepticism is tested by Lucas as he takes him through his current patient’s troubles but is really tested when things get personal.

The film starts off as an interesting spy/exorcism mash up as Michael is sneakily recruited by his local Bishop and Michael discovers this sleek and hi-tech exorcism training center.  But the first potential hurdle to overcome with buying into this movie is; why the hell would the Church want to recruit a forced into the church, doubter, for their super awesome exorcism team?  Regardless of this, I was moderately interested in what the film was serving up for the first couple acts.  There is a fair and unbiased discussion on the nature of possession and whether it is devilish beings or cries for psychiatric help?  The film’s first two acts focus on a young girl who is pregnant and “possessed” but her mental state is called into question when it is discovered she was raped by her father and that it was his baby inside.  Michael presents a very convincing case for the side of science while Father Lucas remains faithful; an interesting discussion whether you are religious or not.

The problem is that the film’s third act takes away that discussion and makes the decision for you and that was neither fair nor interesting.  While things remain rather grounded there is little doubt as to what is going on and the film quickly become dull and uninteresting.  The film’s third act was such a drag and goes nowhere.  The big final scene is even tedious and uninteresting with no real scares or surprises.  Now I understand that this film isn’t trying to be scary, and should by no means be viewed as a horror movie, but nothing really happens for the final thirty five to forty minutes of the film.  Though thinking back on the film, I might have been far more affected had I fallen on to one side of the aisle in this argument that I can’t even really see from my vantage point.

While the film fizzles out, Mikael Håfström still made a solidly produced film that looks nice and, outside its pacing, doesn’t leave much for the technical viewer to complain about.  I almost wish the film would have been an unmitigated mess so I could have laugh at the awfulness of it all and enjoyed myself.  But that was not in the cards and I was left to wade restlessly and drowsily (yes I felt both of these at once) through the dull proceedings.

Acting wise the film is fine with Anthony Hopkins being the most enjoyable member of the cast.  As Father Lucas, Hopkins, is playful, funny, and fun to watch as he unconventionally mentors along Michael through the trials of exorcism.  Hopkins does touch the tip of the mountain of going over into laughably over the top in the final couple scenes, but he (thankfully?) never tumbles over.  Colin O’Donoghue stars as Michael and does a serviceable enough job but fits the dull proceedings well by being rather uncharismatic throughout.  Alice Braga falls in line with her co-star O’Donoghue and can’t elevate the picture either.  Thankfully, old pros Ciarán Hinds and Toby Jones round out the other main supporting roles and both do fine work as always.

In the end, The Rite isn’t a mess by any means but fails to entertain for the majority of its runtime.  Hopkins tries his best to keep things interesting, and he does to an extent, but the film folds in on itself when it excludes the viewer from making any decisions on the material.  The third act is an endurance test of patience with an uninteresting material, but depending how you feel about exorcism the film might affect you more.  Fans of horror should steer far away though as this is not in their wheelhouse, actually I don’t know who this film was made for.  Oh well.

The Rite is a D