Another Take By Zac: Film Review: The Mechanic 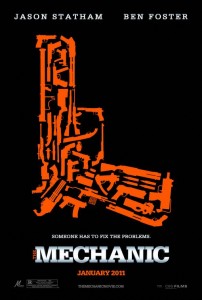 The Mechanic is a fun hitman in training film that features a solid relationship between its leads, good action beats, and tight filmmaking that doesn’t really waste a minute.

Arthur Bishop is the man.  Working for a covert government(?) agency, Bishop is tasked with the hardest of the hits that come across their plate and most of the time he has to make things look natural.  Hit after hit goes off without a hitch, but when he is asked to take out his mentor/contact with the agency, Harry McKenna, for being a mole, Arthur, is put into a very tight spot.  Bishop respectfully completes his task, but when McKenna’s son, Steve, comes to Bishop to learn his ways Bishop reluctantly decides to take him up on the request.  The two train and carry out a couple of hits along the way before the South African conspiracy that brought down Harry rears its ugly head again.

The film is an action film at its heart but there isn’t a whole lot of action.  Two major set pieces and a brutal fight are the only three action set pieces of the film but the all easily deliver.  The film spends the majority of its first half building up the meticulously of Bishop and the bravado of Steve.  Steve is an excellent learner but a bit of a hot head when push comes to shove.  With all that said, the two provide some excellent set pieces when they unfurl and those looking to scratch their action itch will not be disappointed.  The film actually strikes the just right balance for what it’s trying to do between character development and action.  The characters aren’t terribly deep but we like, enjoy, and care about them and the action while loaded to the final act mostly is solid and the film is a breeze to get there.

The unfortunates for the film though lie in the predictability of the proceedings.  If you haven’t figured out the twist from my spoiler free intro yet well then you will probably get more enjoyment out of the film then I did.  Not to say I didn’t enjoy the show, it was a good time, I am just a bit perplexed with the last three or so minutes of the movie.  Some things happen that make sense in the context of our main characters but thematically it only makes sense if you are running a studio.  The events unfold like you are supposed to be rooting for the outcome but the result isn’t a victory for anyone nor is it earned in the characters.  I will stop speaking in code now, just let me know what you thought of it in the comments I guess.

The cast is very good here though with Jason Statham being Jason Statham, not that there is anything wrong with that, and Ben Foster providing some life to the picture.  The two’s relationship as Arthur and Steve, respectively, is mostly serious but has enough light beats to really get behind these guys.  They both do a great job on the physical side with Foster actually getting the best showcase in a brutal fight that unravels on his first hit.  Foster is one of the most underrated actors of his generation and he continues to show how charismatic and likable he can be here.  Donald Sutherland is sage like and easy to like as Harry and I due wish we got a bit more of him.  Props are also deserved for Tony Goldwyn for playing Dean appropriately straight with an, “it is what it is,” mentality.  Lastly, Jeff Chase bounces off Foster incredibly well and is a physical beast in the brief time we get to see him on screen.

In the end, The Mechanic is a fun and easy to enjoy action flick that doesn’t sacrifice character for action.  The action beats are well executed, if shot a bit to close for my liking, and there is just the right amount of humor and “oh shit” moments along the way.  Simon West’s film is face paced, inventive with its action, and features a couple of likable leads that will most likely be enjoyed by anyone that wants to see it.  The Mechanic is a fun time for the action fans out there, just don’t anticipate a balls to the wall film from start to finish and get to know the characters a little bit better; makes every movie better.

The Mechanic is a B